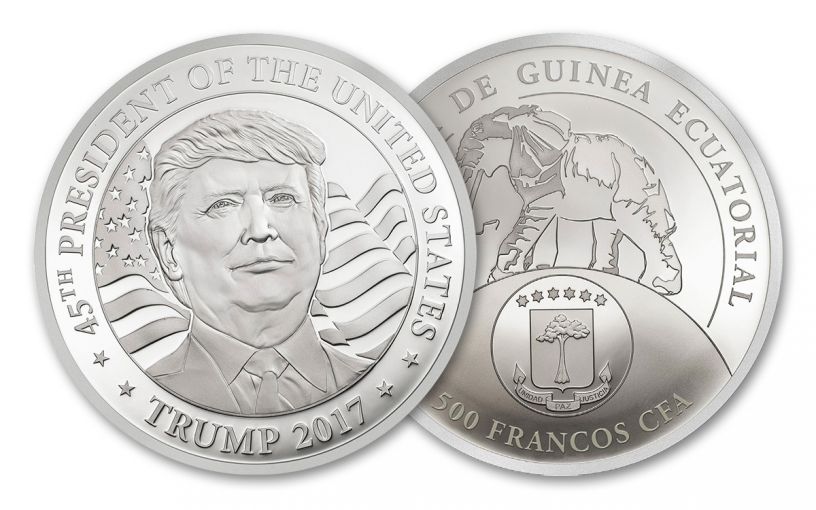 Availability: Out of Stock
This item is currently Out of Stock. Please sign up to be notified if this product becomes available.
Item #
309529
Add to Wish List Add to Wish List Wishlist is for registered customers. Please login or create an account to continue. Add to Compare

Commemorate a New American Era With This Silver Trump Coin!

On January 20th, 2017, Donald Trump became the 45th President of the United States, capping off one of the most tumultuous, at times outrageous, presidential campaigns in American history. Starting off his journey as an outsider in his own party, Trump quickly rose to the top of a crowded field of primary candidates through constant campaigning, strategic Twitter use and a populist message that resonated with a growing number of Americans. After securing the Republican Party nomination, Trump faced a formidable opponent in former First Lady Hilary Clinton. When the dust settled, Donald Trump emerged on top with a significant Electoral College victory. And, even though he is supported by a Republican majority in both the House and Senate, he faces a nation that is still divided in intense debate.

As Trump begins his quest to "Make America Great Again" in the Oval Office, this monumental occasion deserves a silver proof as big and bold as the man himself. GovMint.com is proud to be the exclusive distributor of the first legal tender silver coin struck with the image of the newest American President. To start, there's only one word for this silver coin's diameter - HUGE! This 10 gram silver proof is struck to a diameter of over 38 mm! In addition, each coin is proof-struck in 10 grams of 99.9% pure silver using specially treated planchets and polished dies. Multiple strikes bring superb definition to Trump's profile as he looks to the future in front of a waving United States flag. Flip the proof over, and you'll find the Republican Party's symbolic bull elephant along with all of the coin's legal tender details. It's a coin that would be equally at home on Fifth Avenue, Pennsylvania Avenue or the street where you live!

Your Trump Silver Proof Coin will arrive to you with a numbered certificate of authenticity. Only 5,000 of these spectacular silver proofs will be produced, putting you in direct competition with not only coin enthusiasts, but also presidential memorabilia collectors around the world. Don't miss out on this tremendous opportunity to bring "The Donald" to your collection. Order yours today!