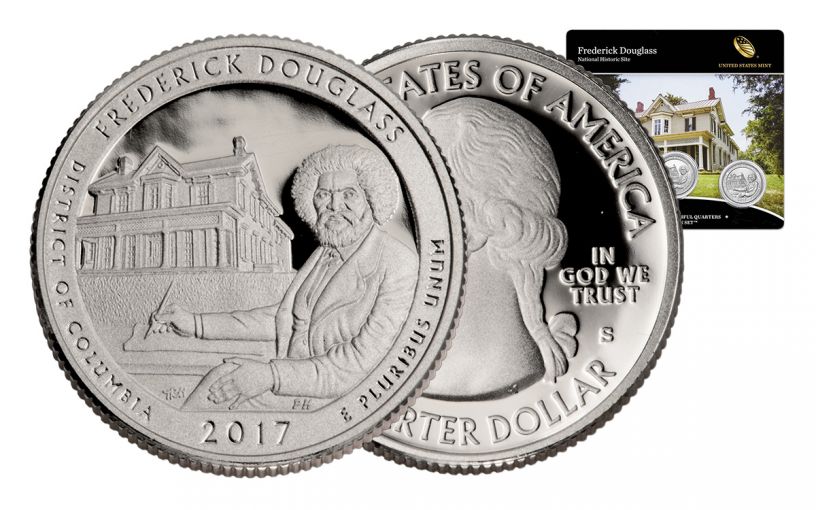 Availability: Out of Stock
This item is currently Out of Stock. Please sign up to be notified if this product becomes available.
Item #
309613
Add to Wish List Add to Wish List Wishlist is for registered customers. Please login or create an account to continue. Add to Compare

An American Hero, Forever Remembered in a Stunning Three-Quarter Set!

From Slavery Through Education to a Legacy that Changed a Nation

19th century America had more than its fair share of heroes that came from humble beginnings. However, few traveled longer or worked harder, not only for what they believed in, but for their own freedom, than Frederick Douglass. Born into slavery in Maryland, he secretly learned to read as a house servant in Baltimore. As he was transferred from place to place, he sought out knowledge whenever and wherever he could find it. Finally escaping in his early twenties, he eluded slave hunters for years in New England by working under the name "Douglass." From there, all it took was one speech at an antislavery convention in 1841 to catapult him to prominence as a speaker, author, abolitionist, publisher, presidential consultant, statesman and diplomat. Because of his talent, intellect and passion, he established himself as an American hero, earning not only the freedom of millions but his own as well.

A Legendary Home, an Influential Figure, a Set Not to Be Missed!

After the Civil War, Frederick Douglass moved into his home in Washington D.C. where he lived for 17 years until his death in 1895. 67 years later, his estate was established as the Frederick Douglass National Historic Site. In 2017, this monument to knowledge, perseverance and equality was immortalized as part of the America the Beautiful Quarters® Program. Now, you can bring home a special three-quarter set commemorating this special release. All three of these legal-tender 25 cent coins have the same designs in common -- one side features John Flanagan’s restored 1932 portrait of George Washington, while the other side depicts Frederick Douglass at his desk, pen in hand, with his home in the background. However, each of these quarters hails from a different United States Mint location. Both the mints at Philadelphia and Denver contribute an uncirculated coin each, while the single proof coin in the set comes from the San Francisco mint-- known for producing exceptionally well-struck proofs with razor-sharp details and mirrored surfaces.

Three Coins Come Together for One Perfect Collection Addition!

Your 2017 Frederick Douglass Three-Quarter Set will arrive to you in its original United States Mint packaging. All three coins are sealed together in a plastic card, giving you uninhibited visual access to the amazing detail of each quarter. In addition, your display card features a vivid color image of Frederick Douglass's home, information about the site and a certificate of authenticity. It all adds up to a set that you can't miss -- bring home this historic set today!