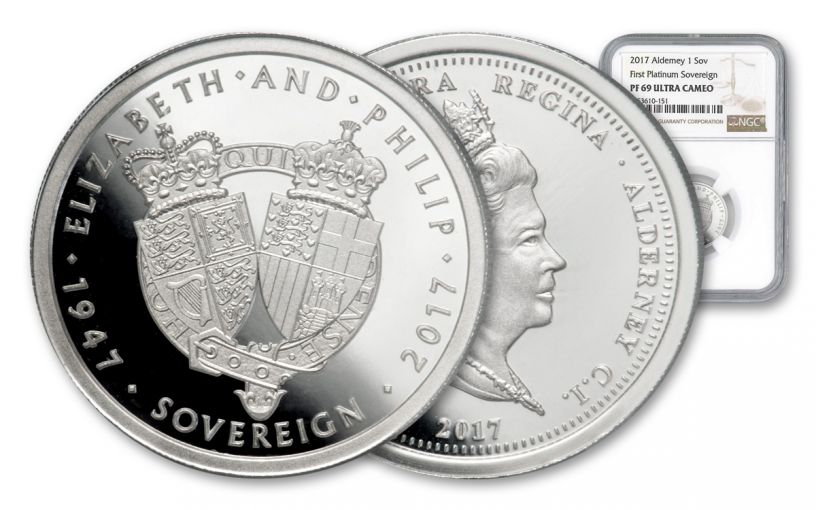 Availability: Out of Stock
This item is currently Out of Stock. Please sign up to be notified if this product becomes available.
Item #
332013
Add to Wish List Add to Wish List Wishlist is for registered customers. Please login or create an account to continue. Add to Compare

While British Sovereigns date to 1489, the first modern Sovereign was struck just over 200 years ago in 1817. Since that time, the Sovereign has been the world standard in gold coinage. By contrast, most continuous modern coin series date back no further than the 1970s and 1980s – with many series being even younger! So, to really mark the modern Sovereign’s historic 200th anniversary, the British Commonwealth Mint and the island of Alderney have released a beautiful tribute: The world’s first-ever Sovereign struck in pure platinum!

This issue also marks 70 years of marriage between and Prince Philip and Queen Elizabeth II, the longest serving monarch in British history. Struck in nearly a quarter ounce of 99.95% platinum, this proof features the conjoined shields of Elizabeth II and Prince Philip, along with the traditional garter and the dual dates of the anniversary, "1947" and "2017."

Struck in Proof condition with frosty design and mirrored fields, this historic release was limited to just 999 pieces – just 154 of which were graded by the Numismatic Guaranty Corporation (NGC) as being in near-perfect Proof-69 Ultra Cameo (PF69UC) condition, a distinction that means your almost-flawless coin will showcase an impressive full strike and indistinguishable imperfections – well above and beyond the quality of the vast majority of coins in the series.

In 1942, during the height of World War II, 16-year-old Princess Elizabeth registered with Britain's employment agency, then known as the Labour Exchange. There, she learned how to drive ambulances, among other vehicles, deconstruct and rebuild engines, and change tires. She would use these skills in service to her country during the Second World War. Her service earned her the hearts of the British public, which she retains to this day.

With a mintage of just 999 pieces, this first-ever Platinum Sovereign Proof will not be available for long, so order yours now!

Secure the first-ever platinum sovereign and you’ll be able to celebrate two anniversaries in one fell swoop – the 70th anniversary of Queen Elizabeth’s marriage to Prince Philip, and the 200th anniversary of the modern Sovereign! It’s a historic coin that you do not want to miss!