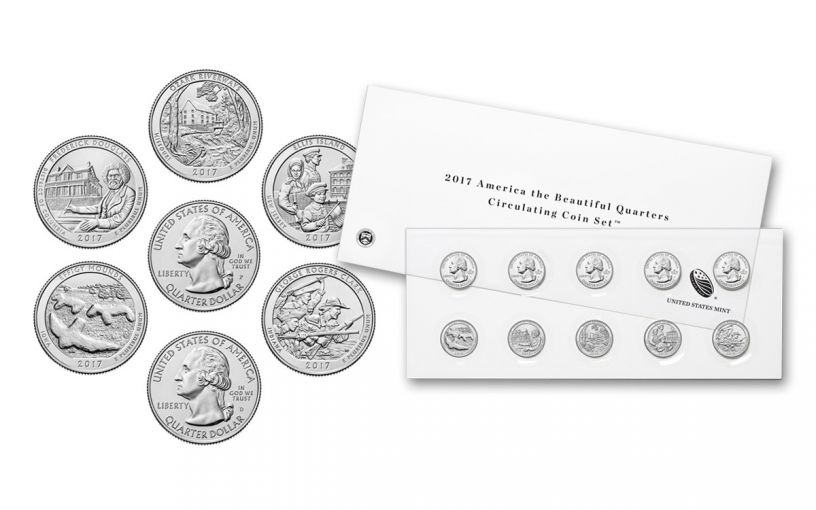 Availability: Out of Stock
This item is currently Out of Stock. Please sign up to be notified if this product becomes available.
Item #
317040
Add to Wish List Add to Wish List Wishlist is for registered customers. Please login or create an account to continue. Add to Compare
Product Description

The Next Chapters in the America the Beautiful Quarters® Program Are Here!

While the festivities surrounding the National Park Service's 100th birthday has come and gone, the United States Mint's America the Beautiful Quarters Program is still going strong! Since 2010, 35 of the country's most beloved national parks, forests and monuments have received their due. Now, in 2017, five more join this club of collector favorites -- and you can get them all in this gorgeous America the Beautiful Quarters Circulating Coin Set!

This eighth year of designs takes us through the Midwest and up to the Eastern Seaboard, covering people and places from our country's distant past all the way to the early 20th Century. The sites included in the 2017 America the Beautiful Quarters Circulating Coin Set include:

Your 2017 America the Beautiful Quarters Circulating Coin Set features all five designs as struck by the U.S. Mints at Philadelphia and Denver -- that's 10 coins in all! Plus, all of your coins will come sealed inside a special clear U.S. Mint envelope. Through this easy-to-open package, you can put these coins into your own favorite albums or holders in no time flat! Collectors of all ages eagerly wait for these sets to arrive each year, and we’re already projecting demand for these 2017 sets to be high. Don’t miss out on this opportunity to keep your collection complete or start on a whole new adventure -- get yours today!