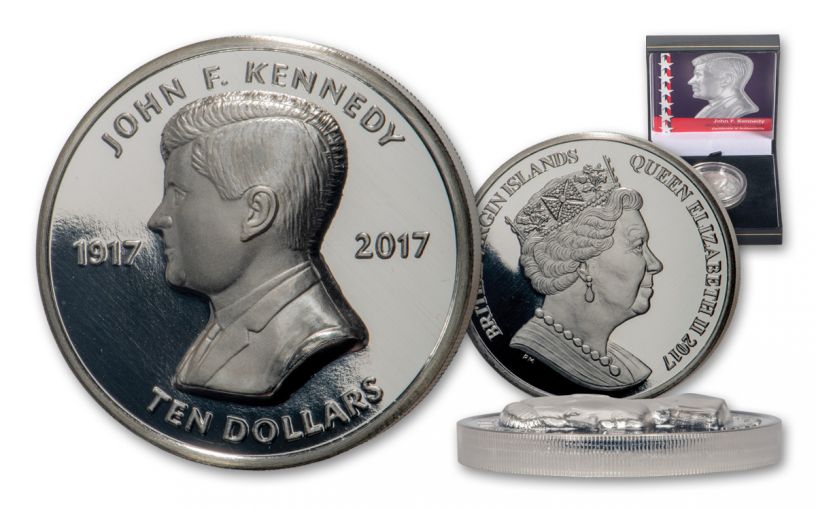 Availability: In Stock
This item will ship within 2 business days.
Item #
309364
CC Payments as low as
$99.50 / month
Add to Wish List Add to Wish List Wishlist is for registered customers. Please login or create an account to continue. Add to Compare
Recommended Products
Product Description

2017 marked the 100th year since the birth of John Fitzgerald Kennedy, one of the most celebrated presidents in U.S. history. To honor the 35th President of the United States on the centenary – or 100th anniversary – of his birth, the artists at the award-winning Pobjoy Mint struck this beautiful high-relief proof in two ounces of 99.9% fine silver.

JFK’s accolades were numerous, but one for which he received much attention was his purple heart, earned during World War II. After his PT boat was rammed by a Japanese destroyer, Kennedy led the survivors to safety despite his own injuries. For his heroic actions, Kennedy was awarded a Navy and Marine Corps Medal in addition to the Purple Heart, making him the only U.S. President to have earned either of those honors. While his supporters made a lot of political hay about the honors, Kennedy himself famously joked about the ordeal, saying: “It was involuntary. They sunk my boat!”

Issued on behalf of the British virgin Islands, this legal-tender $20 coin features an incredibly detailed high-relief profile of JFK on the obverse along with dual dates of 1917 and 2017. In a poignant nod to Kennedy’s World War II heroics, a genuine Swarovski crystal shaped like a Purple Heart has been imbedded into the coin’s surface just to the left of Kennedy’s profile – a fitting reminder of the medal earned by Kennedy during World War II.

Considering its incredible price and limited mintage of only 1,917 pieces, this collectible may not last long. Ask not what your collection can do for you, discover how you can improve your collection by ordering this coin now!