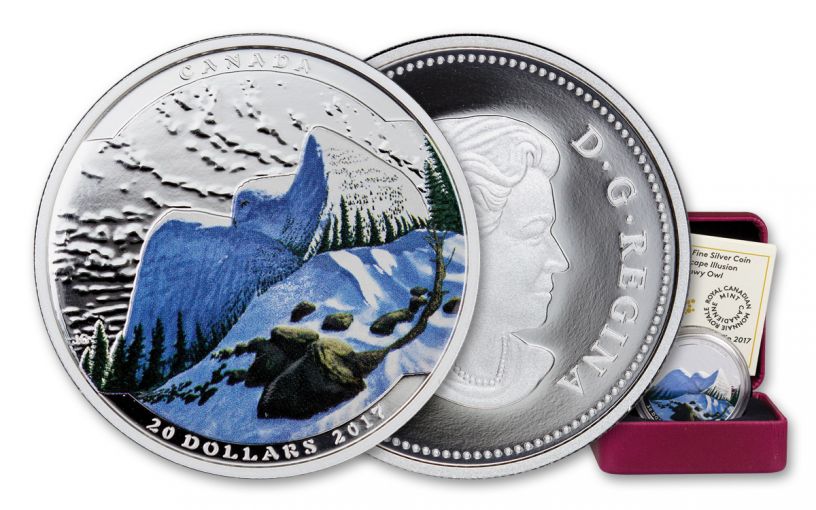 Availability: Out of Stock
This item is currently Out of Stock. Please sign up to be notified if this product becomes available.
Item #
303376
Add to Wish List Add to Wish List Wishlist is for registered customers. Please login or create an account to continue. Add to Compare

For the final release in its Landscape Illusion Series, the Royal Canadian Mint chose the great Snowy Owl. The choice proved to be a superb decision as the colorized design of a snow-covered mountain on the reverse of this coin transforms into a majestic snowy owl upon a second look. Struck in a full ounce of highly pure 99.99% silver, this $20 legal-tender proof pays tribute to both the rugged nature of Canada’s wilderness as well as one of the creatures that dwells in that harsh environment.

With its yellow eyes and black beak, Canada’s snowy owl is one of North America’s largest owls. Their nearly all-white plumage helps camouflage them in their arctic habitat where they hunt primarily rodents and waterfowl. A true symbol of Canada, the snowy owl even appeared on the cover of “Fly by Night;” the second album by Canadian progressive rock supergroup Rush.

The 2017 Canada Landscape Illusion – Snowy Owl One-Ounce Colorized Silver Proof is an exceptional collectible with an original theme that appeals to art, nature and animal lovers alike. You will be amazed by the clever use of shadows, lines, shapes and light to create this coin’s eye-bending design.

Don’t delay – with just 5,500 of the coins ever struck, there aren’t enough of these owls to go around! Add one to your cart today!