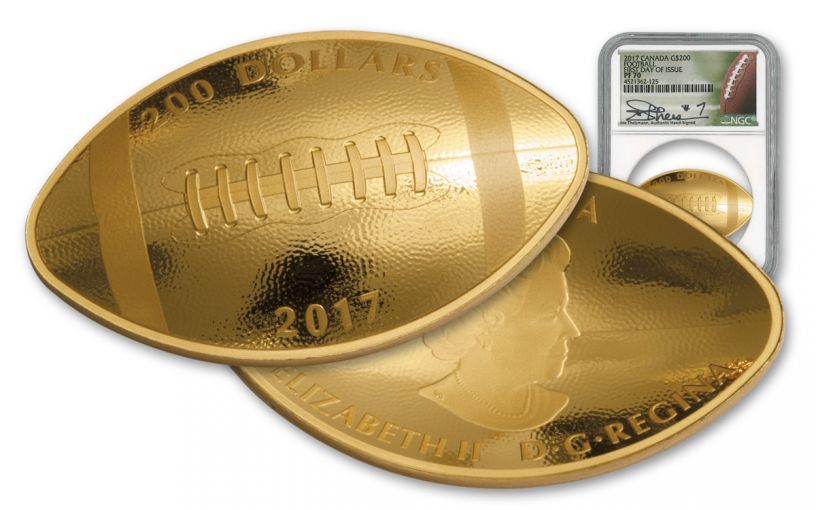 Availability: Out of Stock
This item is currently Out of Stock. Please sign up to be notified if this product becomes available.
Item #
302108
Add to Wish List Add to Wish List Wishlist is for registered customers. Please login or create an account to continue. Add to Compare

Monday morning quarterbacks have lamented the fact that they passed on acquiring this football-shaped coin when it was released in 2017. But now it’s back and better than ever – thanks to the added touch of a third-party grading service and the addition of a personally hand-signed signature of gridiron great Joe Theismann!

In 2017, the artisans at the Royal Canadian Mint meticulously crafted a football coin that faithfully reproduced all the standardized features of a modern Canadian football: the leather panels, “night stripes,” and laces that were once part of the manufacturing process but are now used to maximize grip. The coin really comes alive thanks to its unique shape and convex reverse. This remarkable legal-tender $25 coin was struck in a full ounce of highly-pure 99.99% gold and is from a strict limited edition of only 550 coins!

Your 2017 Canada Football One-Ounce Gold Coin has been graded by the Numismatic Guaranty Corporation (NGC) to be in in perfect Proof-70 (PF70) condition, a distinction that means your perfectly-graded proof will have ZERO imperfections – showing all features and fields exactly as the engraver and mint intended! In addition, NGC has certified that your proof is a First Day of Issue (FDI) coin – independent authentication that it was released by the mint during the premier day of the series' issue.

Finally, the label encapsulated with your coin features the signature of legendary quarterback Joe (rhymes with “Heisman”) Theismann. An All-American quarterback at Notre Dame, Theismann is a member of the College Football Hall of Fame. He was drafted by the National Football League’s (NFL) Miami Dolphins in 1971, but failed to reach a contract agreement and played for the Toronto Argonauts of the Canadian Football League (CFL) for three seasons. With the Argos, Theismann was a two-time All-Star, and only a late fumble near the goal line by the team’s running back cost Toronto its first Grey Cup championship since 1952. The Washington Redskins secured Theismann’s rights from Miami in 1974, and he went on to play 12 years for the ‘Skins, twice leading his team to the Super Bowl; and winning it in 1982. His playing career came to an abrupt end in 1985 after he was famously blindsided by the New York Giants’ Lawrence Taylor on Monday Night Football and suffered a compound fracture of his lower right leg.

Time is running out on your chance to get this coin. But there’s no need for a “Hail Mary,” just click it to your cart now and you’ll score with the 2017 Canada Football One-Ounce Gold Proof!