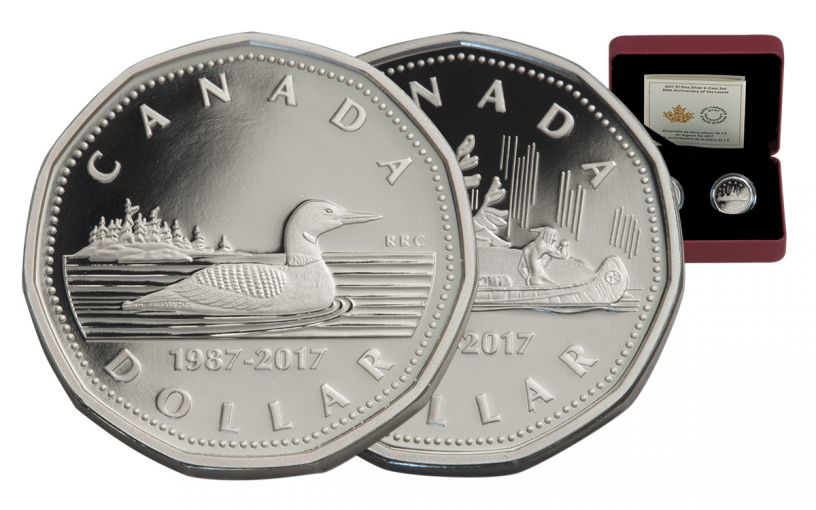 Availability: In Stock
This item will ship within 2 business days.
Item #
311567
Review this product
Add to Wish List Add to Wish List Wishlist is for registered customers. Please login or create an account to continue. Add to Compare
Product Description

A 30-Year Canadian Classic and the Coin it Replaced

On the morning of November 3, 1986, a courier service from the Royal Canadian Mint in Ottawa picked up two freshly-engraved master dies for delivery to the mint's production plant in Winnipeg. One die carried Susanna Blunt's profile of Queen Elizabeth II, the other carried Emanuel Hahn's iconic "Voyageur Canoe" scene. Dies like these had graced Canada's first silver dollar since 1935, but that was about to change. The two steel dies never arrived in Ottawa, and Winnipeg investigators believed the pair might have been swiped. Rather than risk dealing with counterfeits, the mint chose a new design, Robert-Ralph Carmichael's now-iconic "Loonie." The first of these bronze-plated nickel dollar coins went into circulation on June 30, 1987.

While details in the suspected theft of the Voyageur Canoe dies are few and far between, over 850 million Loonie dollars have been minted since 1987, and their image stands as a ubiquitous symbol of Canadian culture. In lieu of buying tickets to a yet-to-be-optioned summer heist thriller based on the story, you can own this 2pc CAN 2017 Silver 30th Ann. of The Loonie PF Set conversation piece and make up the details to entertain your guests.

If you unknowingly wound up with a counterfeit Voyageur Canoe dollar made with the missing dies, you would be required to turn it over to police without any compensation. Rather than answer questions about where you procured an illegal reproduction struck with long-lost dies, you can own this historic 2pc CAN 2017 Silver 30th Ann. of The Loonie PF Set, display it in your home, and let the police officer get back to writing his screenplay. But with only 10,000 pairs minted, these coins are bound to vanish fast! Order today!