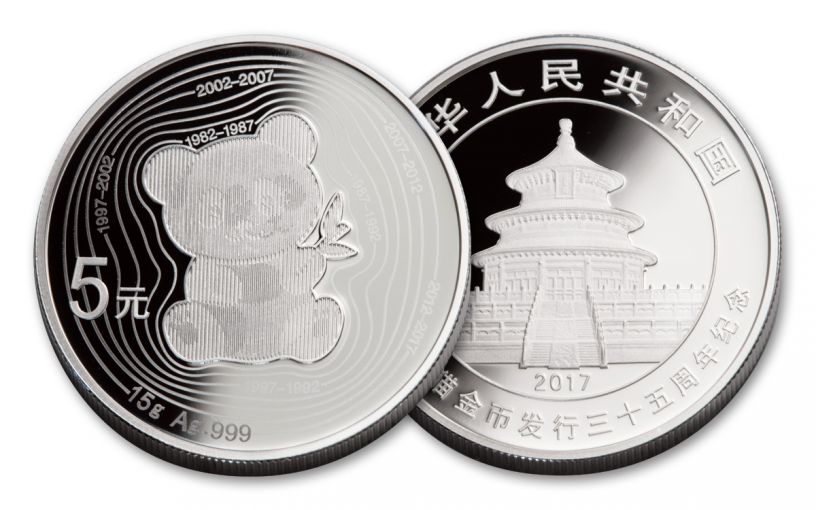 Availability: Out of Stock
This item is currently Out of Stock. Please sign up to be notified if this product becomes available.
Item #
320191
Add to Wish List Add to Wish List Wishlist is for registered customers. Please login or create an account to continue. Add to Compare
Product Description

This Special 35th Anniversary Panda Has a Ring to It

In 1982, the China Mint introduced the Gold Panda coin series to the world – a debut that instantly became a smash hit with collectors.  A year later the Silver Panda series was launched to equally popular acclaim. In the time since then, each year has delivered a new adorable design along with a wave of international demand. And now that China's government has removed restrictions on private gold and silver ownership, these cute coins have also become a domestic sensation with few ever leaving Asia for global distribution!

2017 marked the 35th anniversary of the Panda program, and the China Mint celebrated with this special Panda Proof struck in 15 grams of 99.9% silver. The proof brilliantly highlights the China Mint's ingenious craft with an accordion design of a cartoon panda. Nudge it from side to side and the Panda looks like it's moving! This clever creation is wreathed by rings and dates of the five-year eras within the coin's history.

Your coin will come individually secured in its own acrylic capsule and beautifully housed in its original mint box and accompanied by a numbered certificate of authenticity. This coin is truly a “must own” proof from 2017 – don’t miss your chance to obtain this special 35th Anniversary Silver Panda Proof!

Like we said, demand for these proofs has been increasing rapidly each year. With this 35th anniversary proof set piquing interest around the globe, we're expecting the sets in our vault to disappear quickly. Don't miss out on this opportunity to continue (or start) your Panda collection – add one to your cart now!