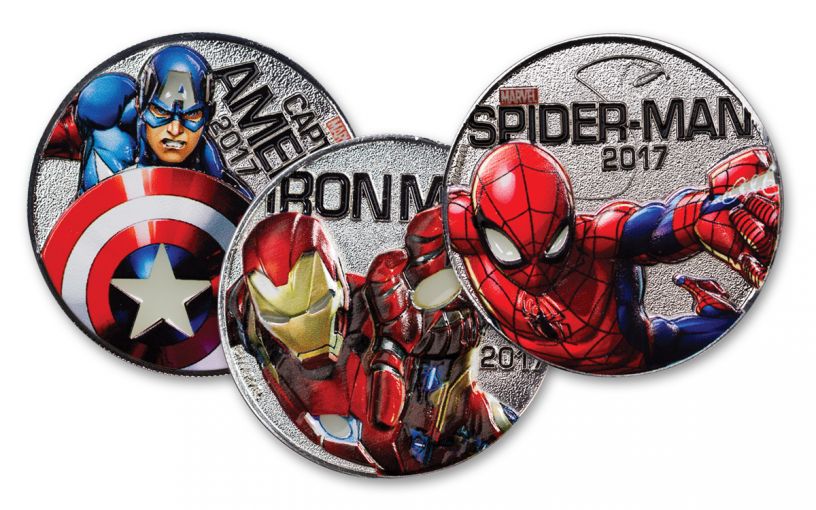 Availability: In Stock
This item will ship within 2 business days.
Item #
317381
Add to Wish List Add to Wish List Wishlist is for registered customers. Please login or create an account to continue. Add to Compare
Recommended Products
Product Description

What could be better than a colorized superhero on a coin? How about three that light up! And not just any three, but a trio of the most popular superheroes in the Marvel Comics Universe – the Amazing Spider-Man, the Invincible Iron Man and Captain America! What’s more, they’re on the world’s first-ever legal-tender coins issued with a light-up feature!

Comic book fans everywhere have been clamoring for these coins since they were first released in 2017. And now, as the film Avengers: End Game shatters global box-office records to close out the Marvel Cinematic Universe’s colossal final confrontation between the Avengers and the Thanos, these coins are more popular than ever! Issued by the island nation of Fiji, these 50-cents legal-tender coin are each a whopping 50 mm in diameter and show your favorite heroes in action-packed poses:

Not only will each coin come in a beautiful specimen condition that features a smooth satin-like matte finish, but each has been specially plated with silver and fully colorized. Whether you’re a fan of the comics, the movies or just enjoy collecting neat coins, this three-piece set is for you. It also makes a perfect gift for any fan!

These are not just any collectibles. These light-up coins are real money plated in real silver, and it’s one of the first of its kind in the entire world!

PLEASE NOTE: Each of these coins contains one or more button batteries which are hazardous to young children.