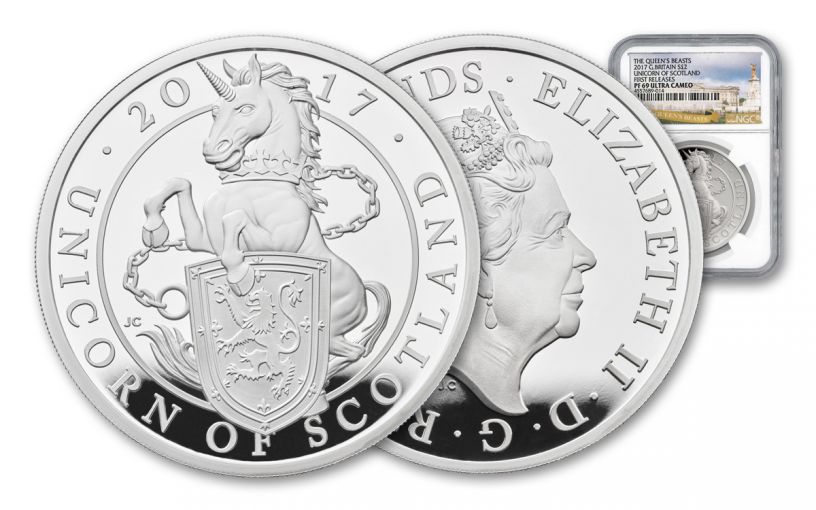 Availability: Out of Stock
This item is currently Out of Stock. Please sign up to be notified if this product becomes available.
Item #
312289
Add to Wish List Add to Wish List Wishlist is for registered customers. Please login or create an account to continue. Add to Compare

The Next Protector of Queen Elizabeth II is Here!

When you're about to be crowned as the Queen of England at the age of 27, it helps to have a bit of protection! That's why the British Ministry of Works commissioned sculptor James Woodford RA to create a series of 10 heraldic beasts, each symbolizing a different chapter of the Queen's genealogy, for Her Majesty's coronation ceremony on June 2, 1953. First sculpted in plaster, the Queen's Beasts have had several homes since their debut, now residing in the Canadian Museum of History in Quebec. However, James Woodford RA also sculpted replicas of the beasts in Portland stone that now sit outside the Kew Gardens in London.

Introducing the Majestic Unicorn of Scotland!

Now, the Royal Mint is introducing the next design in the popular Queen's Beasts coin series -- the Unicorn of Scotland! Accompanying the Lion of England on the Royal Arms since the creature was first added by James I of England, this graceful representation of Scotland has been reimagined for the twenty-first century by acclaimed designer Jody Clark. In addition, Clark designed the coin's obverse -- the latest definitive coinage portrait of Queen Elizabeth II, used on all coins from the UK since 2015.

A Mythical Creature, a Living Legend, a Treasured Keepsake!

Legal tender two pounds sterling, each 2017 Queen's Beast Unicorn of Scotland Proof is struck in one ounce of 99.9% pure silver. Your coin will also come certified Proof-69 Ultra Cameo (PF69 UC) by Numismatic Guaranty Corporation (NGC), a distinction that means your almost-flawless Unicorn of Scotland Proof will showcase an impressive full strike and indistinguishable imperfections. In addition, your proof will come certified First Releases (FR) by NGC, meaning that it was among the first struck by the mint and was verified within the first 30 days of issue. Your proof will be sonically sealed in an acrylic case, giving you the best in protection while granting clear sightlines into every beautiful detail. Finally, your Unicorn of Scotland Proof will come with a Royal Mint numbered certificate of authenticity and booklet detailing the history behind this landmark series.

With the Queen's accomplishment of being the longest reigning monarch in British history, it's no surprise that these silver proofs are already sold out on the Royal Mint's website. Don't miss out on your chance to continue the series, start a new collection or just get a great piece of numismatic art -- buy yours today!