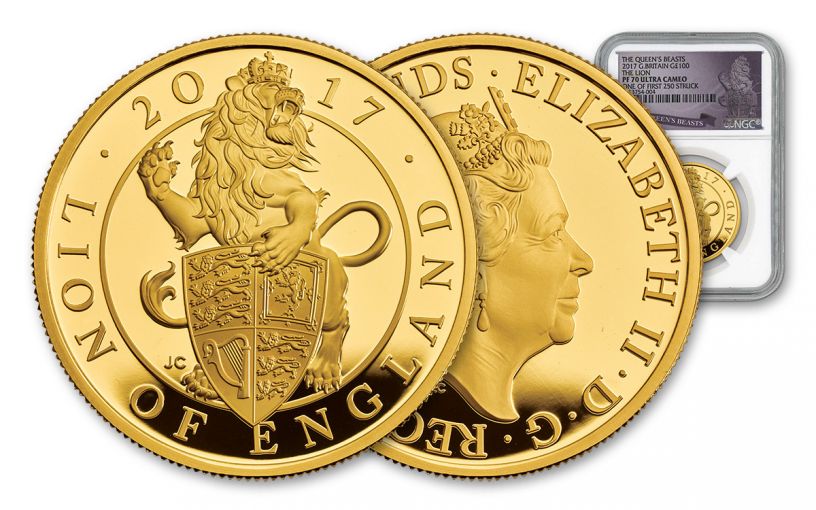 Availability: Out of Stock
This item is currently Out of Stock. Please sign up to be notified if this product becomes available.
Item #
301429
Add to Wish List Add to Wish List Wishlist is for registered customers. Please login or create an account to continue. Add to Compare

The First of Many -- Britain's Roaring Lion!

Great Britain's Royal Mint is celebrating the reign of Her Majesty Queen Elizabeth II with a brand-new series featuring The Queen's Beasts -- ten creatures that stood guard outside her coronation ceremony on June 2, 1953. The first of the series features the Royal Lion of England, a symbol first used by Richard the Lionheart in 1189 as his official coat of arms -- three gold lions against a red shield. Today, those lions are still a part of the Royal Coat of Arms of the United Kingdom, quartered along with symbols representing Scotland and Northern Ireland.

Struck in one ounce of 99.99% pure gold, these 2017 Queen's Beast Proofs carry a legal-tender value of 100 pounds and feature the aforementioned coat of arms, guarded by a massive crowned lion as it establishes its authority with a mighty roar. It's an impressive piece of numismatic art created by Royal Mint engraver Jody Clark, the artist also responsible for the fifth and most recent effigy of the Queen. Get yours today graded perfect Proof-70 Ultra Cameo (PF70 UC) and certified as One of First Struck by Numismatic Guaranty Corporation (NGC)!