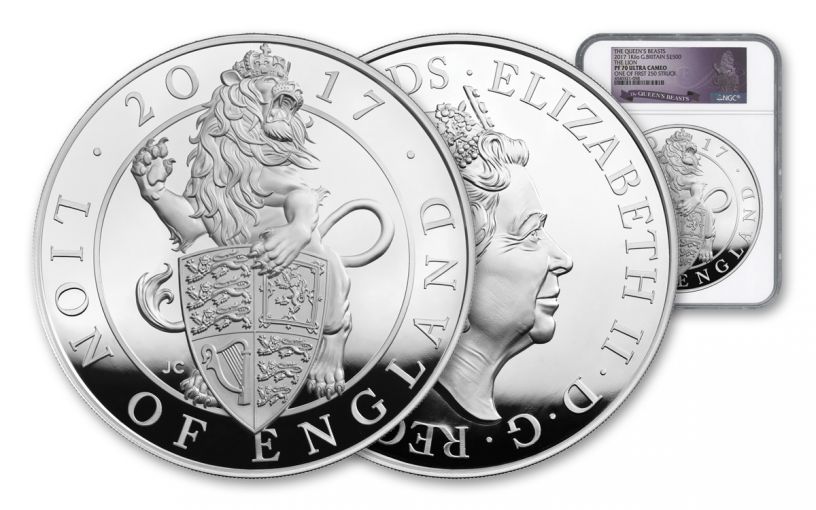 Availability: Out of Stock
This item is currently Out of Stock. Please sign up to be notified if this product becomes available.
Item #
301463
Add to Wish List Add to Wish List Wishlist is for registered customers. Please login or create an account to continue. Add to Compare
Product Description

This Silver Lion Roars as the First of the Queen's Beasts!

This 99.9% pure silver 2017 Queen's Beasts Lion of England Proof is the first coin in a  series featuring the British Monarchy's 10 heraldic animals: the lion, griffin, falcon, black bull, yale (a goat-like creature with huge horns), white lion, white greyhound, red dragon, unicorn and white horse. This one-kilo example has a face value of 500 pounds sterling and comes in a Royal Mint presentation case with a numbered certificate of authenticity.

The origin of the Queen's Beasts dates back more than 1,000 years, when individual families and areas of England displayed their own emblems on flags and shields. These emblems were incorporated into the monarchy, and by the time of King Henry VIII, some of the 10 honored in this series were already established as representing the King.

The designs from this series are taken from a set of sculptures prepared for Queen Elizabeth II's coronation in 1953. The fierce Lion of England raises one paw while placing the other on the Royal Coat of Arms. The Queen and the proof's denomination grace the obverse.

This coin is in perfect condition, according to the experts at the Numismatic Guaranty Corporation (NGC), as illustrated by its Proof 70 grade. NGC also certified the coin as First Struck which means this coin is one of the first struck by the mint.

Only 600 of these hefty silver Lion of England proofs will ever be struck and even fewer will be in perfect condition and hold the claim of being One of First Struck. Astute collectors around the world are already searching them out because, due to their low mintage, they could disappear fast. Don't wait, order yours now!