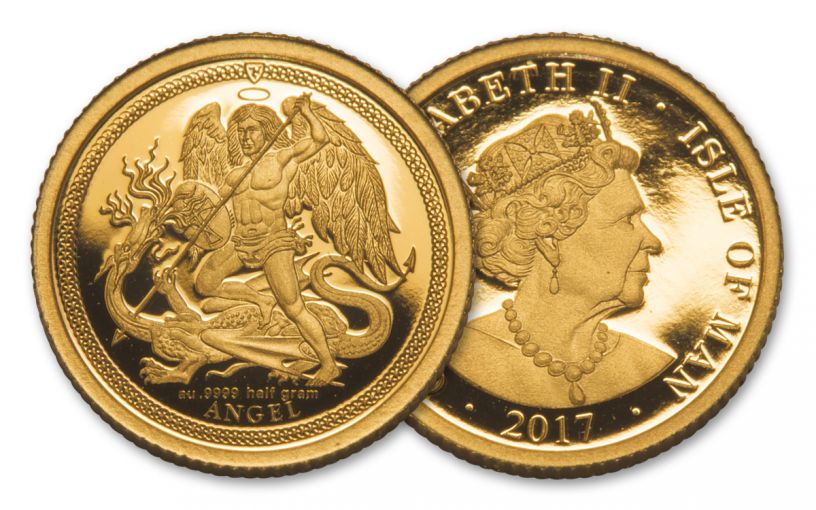 Availability: Out of Stock
This item is currently Out of Stock. Please sign up to be notified if this product becomes available.
Item #
314143
Add to Wish List Add to Wish List Wishlist is for registered customers. Please login or create an account to continue. Add to Compare
Product Description

Debuting in the Book of Daniel and featuring prominently in Revelation, Michael the Archangel is one of the most important figures in the Bible. In spite of his prominence in scripture and, at many times, in liturgies, the ways that people view him have varied over time and across traditions. Some of the ways that he has been viewed are as a healing angel, a protector, and a leader of God’s forces in End Times.

Michael the Archangel’s presence on coins dates back to French issues in the 14th century and Edward IV of England’s issuance of the first British coin to bear his image in 1465.

Many of the images in which he is shown today are based on a French design known as the Angelot. Coins bearing his image have been used as family heirlooms and are believed by many to bring his powers of protection and blessings. The Gold Angel coin series began in 1985 and has been produced annually since then. This year marks the first time that it is minted at CIT, known for their smartminting® technology which results in dramatic relief heights combined with extraordinarily intricate details.

Additionally, it is the first CIT release featuring Jody Clark’s Queen Elizabeth II effigy that replaced Ian Rank Broadley’s design, which adorned countless coins struck between 1998 and 2015. Today, this piece is an annual favorite among collectors.

Cultural traditions and religious beliefs often overlap, and this coin could not embody that relationship more. While Michael the Archangel is particularly important to the Christian and Jewish religion, even many nonbelievers can appreciate the tradition of this coin, and they may even hold onto it as a lucky charm. In fact, the legend of the lucky angel coin has grown and grown for centuries. Napoleon, King Henry VII, fighter pilots, seafarers, rescue and police heroes have all proclaimed the Angel’s powers of luck and protection.

The stunning artistry adds to its appeal for those of all faiths and no faith. Order yours today because a mintage of 15,000 pieces for such a popular coin means that it will not be available for long.