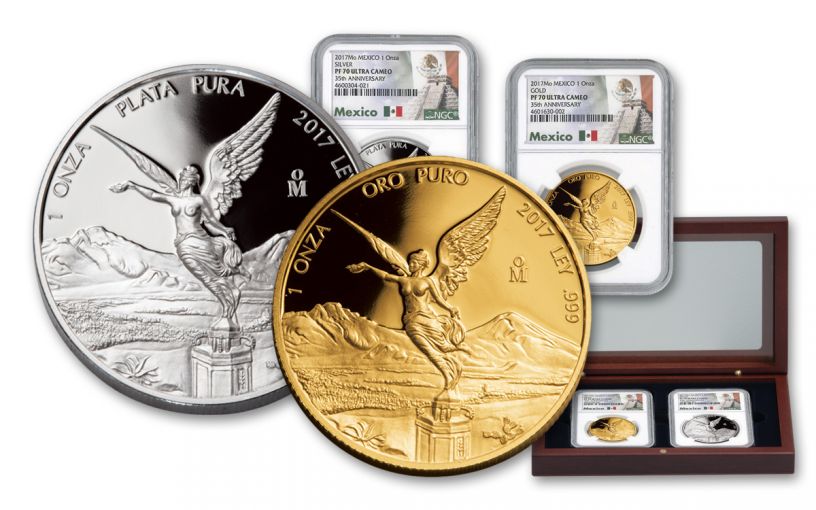 Availability: Out of Stock
This item is currently Out of Stock. Please sign up to be notified if this product becomes available.
Item #
315200
Add to Wish List Add to Wish List Wishlist is for registered customers. Please login or create an account to continue. Add to Compare
Product Description

Own Both Libertads for this Important Anniversary!

“Viva Mexico” and “Viva la independencia” are cried loudly in the streets throughout Mexico on September 16th every year as the country celebrates its independence from Spain. It was on that date in 1810 that Miguel Hidalgo implored his fellow Mexicans to rebel against Spain in a town called Dolores, which is located in the northern-central part of the country. Hidaglo was captured by Spanish forces and executed less than a year later, but Mexico gained its independence on September 28, 1821. The country’s proud heritage and fulfilled dreams of independence are embodied in Winged Victoria, a statue that stands atop the Mexican Independence Victory Column in Mexico City. For thirty-five years, that statue has represented Mexico on the reverse of its bullion coins, the Gold and Silver Libertads.

The two coins in this set had very different histories. The Gold Libertad was first issued in 1981, but production was discontinued until 1991. Production ceased again from 1995-1999 and again in 2001. It has been issued every year since 2002. By contrast, the Silver Libertad debuted in 1982 and has been issued every year since. This set marks the 35th anniversary of the Silver Libertad’s initial release.

Patriotism can be found throughout the world, but there are few countries whose citizens wear that patriotism on their sleeves more powerfully than Mexico’s. The vast country has a fascinating mix of cultures, with the Spanish and Native American influences both contributing heavily to it. Its natural beauty, some of which is on display in the backgrounds of these coins behind Winged Victory in a pair of volcanoes, Popocatépetl and Iztaccihuatl, is both plentiful and diverse. These stunning pieces that celebrate two of the most popular coins in North America will not be available for long, so place your order at GovMint.com today!