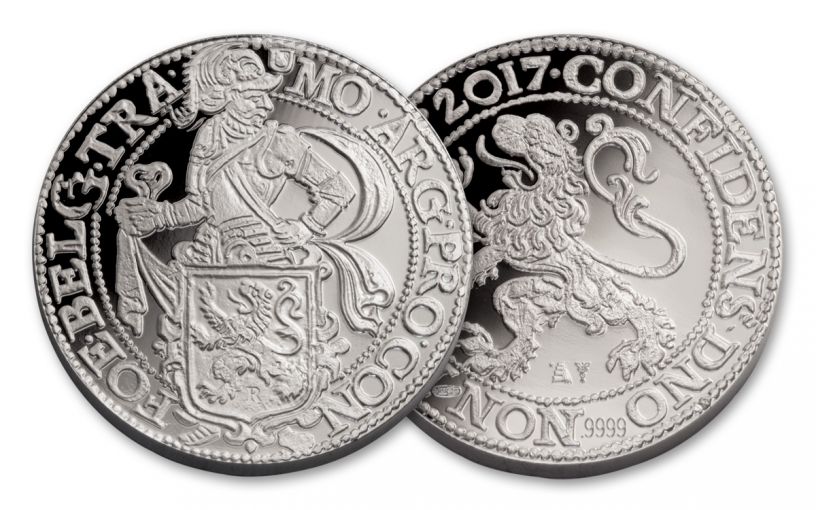 Availability: Out of Stock
This item is currently Out of Stock. Please sign up to be notified if this product becomes available.
Item #
331218
Add to Wish List Add to Wish List Wishlist is for registered customers. Please login or create an account to continue. Add to Compare

For a variety of reasons, not the least of which are the languages that are most commonly used in the Americas – English, Spanish, and, to a lesser extent, Portuguese and French – Dutch colonialism is frequently overlooked. Thanks in large part to the power and expansion of the Dutch East India Company, though, the Netherlands once had a vast reach, which included New Amsterdam, or modern-day New York. One of the most common units of exchange throughout their empire was the silver daalder, from which the word "dollar" came. The pieces in this roll of 100 2017 Silver Restrike of the Daalder coins offer collectors to the opportunity to hold history, as they are modeled off of a coin that played a vital role in New Amsterdam's development into what is now the financial capital of the United States.

The discovery and development of the Americas changed the world, and commerce is what made both possible. As students of monetary history are aware, that commerce was based on the exchange of precious metals rather than fiat currencies, as are most commonly used today. Coins like the daalder on which this round is based fueled expansion and growth, laying the foundation for what has become the most successful economy that the world has ever known. Because daalders were issued for circulation, most of those that have survived are well worn. This roll of 100 2017 Netherlands New York Daalder Restrike coins gives you the chance to own designs that were a part of history. With a low mintage of just 25,000 pieces, though, that opportunity, like the daalder, will soon be history, so order now at GovMint.com!