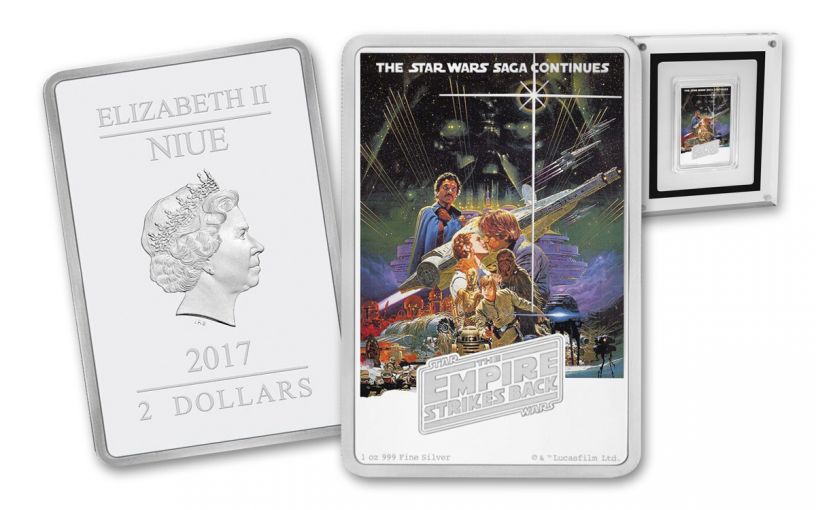 Availability: Out of Stock
This item is currently Out of Stock. Please sign up to be notified if this product becomes available.
Item #
312975
Add to Wish List Add to Wish List Wishlist is for registered customers. Please login or create an account to continue. Add to Compare

Like an x-wing starfighter screaming into view, the original Star Wars blasted into theaters in 1977. Three years later, George Lucas and newly on-boarded director Irvin Kershner delivered the perfect sequel -- The Empire Strikes Back. A deeper, somewhat darker companion to the first film, Empire found the Rebel Alliance under heavy pursuit after the destruction of the Death Star. Not only did it introduce iconic characters like Jedi Master Yoda, Boba Fett and Lando Calrissian, it uncovered deep secrets about Luke Skywalker's origins, raising the stakes for his future.

Fast forward 37 years to 2017. The New Zealand Mint marked the 40th anniversary of the premier of Star Wars with a stunning recreation of the original theatrical poster, minted in an ounce of 99.9% fine silver. It became a huge hit with both coin collectors and Star Wars fans, quickly selling out at the mint. Now, you can own the follow-up to this blockbuster of the coin world -- the 2017 One-Ounce Silver Star Wars Empire Strikes Back Poster Bar Proof!

Like we mentioned, the previous Star Wars proof in this 40th anniversary series sold out completely at the New Zealand Mint. This Empire proof claims both the same limited mintage and fervent fan base. With one down and the third in the series (Return of the Jedi) on the way, collectors are firmly focused on this spectacular proof. Don't miss your chance -- order your 2017 One-Ounce Silver Star Wars Empire Strikes Back Poster Bar Proof today!