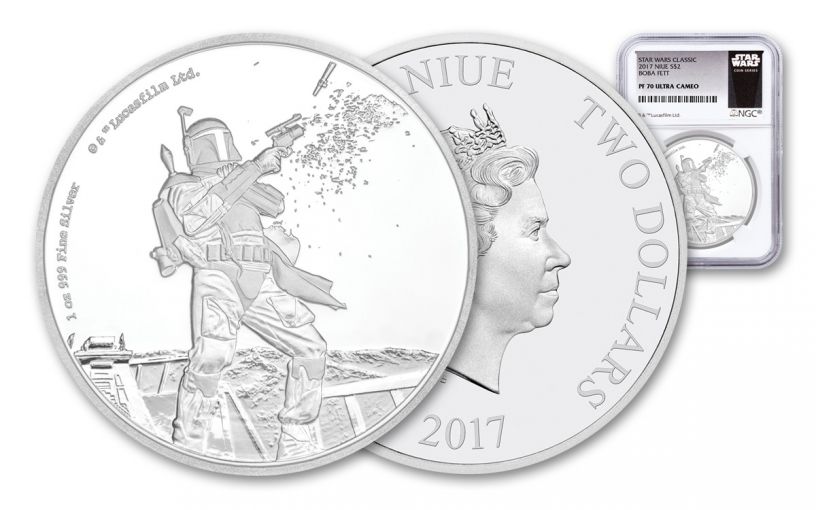 Availability: In Stock
This item will ship within 2 business days.
Item #
318525
CC Payments as low as
$89.50 / month
Add to Wish List Add to Wish List Wishlist is for registered customers. Please login or create an account to continue. Add to Compare

"The Best Bounty Hunter in the Galaxy" Is Within Your Sights!

Talk about stage presence -- it took less than ten lines of dialogue in seven minutes of screen time spread out over three films to make intergalactic bounty hunter Boba Fett a Star Wars™ favorite! Working between both Darth Vader and Jabba the Hutt, Fett's capture of Han Solo at the end of The Empire Strikes Back served as menacing proof of his terrifying skills. And even though Fett met an untimely end at the mouth of a sarlacc in Return of the Jedi, fans around the world still wanted more!

In the decades since, Boba Fett's story has been expanded in countless ways. His origin as the clone of bounty hunter Jango Fett was revealed in Attack of the Clones, and his mission to avenge his father's death is detailed in the animated series Star Wars: The Clone Wars. Not only that, but no comic convention is complete without seeing someone decked out in Fett's trademark Mandalorian armor. Now the time has come to bring this merciless mercenary to your collection, frozen in action on a superb silver proof!

The New Zealand Mint has been issuing amazing Star Wars proofs over the past several years, many becoming fast favorites among collectors. Entries from this 2016-2017 series of galactic heroes and villains have already sold out at the New Zealand Mint. Whether you're looking to grow your collection or score this fan-favorite on its own, don't wait before this opportunity disappears as well -- secure your own 2017 One-Ounce Silver Star Wars Boba Fett Proof now!