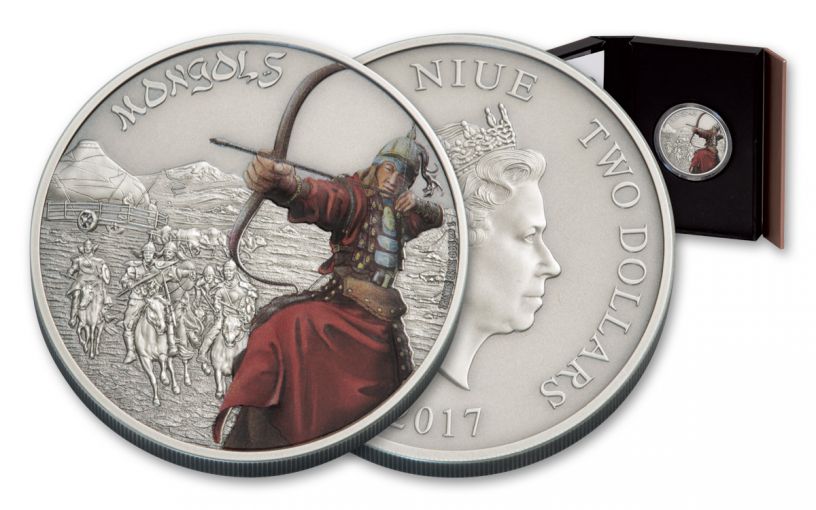 Availability: In Stock
This item will ship within 2 business days.
Item #
312801
Review this product
Add to Wish List Add to Wish List Wishlist is for registered customers. Please login or create an account to continue. Add to Compare
Complete your collection with one of these:
Related Articles
Product Description

Where There’s War… There’s a Warrior

According to Chris Hedges' What Every Person Should Know About War: "Of the past 3,400 years, humans have been entirely at peace for 268 of them. History is filled with stories of legendary warriors, who fought and conquered their enemies through superior battle strategies and tactics and their skill at hand to hand combat and weaponry.

The Mongol Empire existed during the 13th and 14th centuries and emerged under the leadership of Genghis Khan. After uniting many of the nomadic tribes of Northeast Asia, Khan’s armies conquered large areas of central Asia and China and went on to established the largest empires in history, stretching from the Sea of Japan to Central Europe.

The Mongol warriors were fierce and well trained in the art of war. Skilled horseman and extremely effective with a composite bow, they could fire up to six arrows a minute. The Mongol army was never very large, but with the use of sneak attacks, fake withdrawals and placing dummies on the backs of horses and lighting strings of bonfires at night, their warriors seemed overwhelming to their enemies

The eighth coin in the 2017 Warriors of History coin collection, the Mongols 1 ounce Silver Proof celebrates these legendary warriors of history. This amazing coin features a colorized Mongol warrior ready to fire his trusty composite bow. He stands against an antique finish background where you’ll see a line of warriors on horseback following their leader into battle. The Obverse depicts the profile of Queen Elizabeth II, 2017 and the denomination of $2.

The grandson of Genghis Khan, Kublai Khan, wrote letters to the Pope and requested he send a large body of educated men to instruct the Mongol Empire in the ways of the West and Christianity. He gave them to Marco Polo to delivery to the Pope. But, by the time Polo got back to Rome, Pope Clement IV had just died. Don’t miss your opportunity to own coin featuring the Mongol Warriors. Capture your 2017 Warriors of History ¬– Mongols 1 ounce silver Proof Coin today!