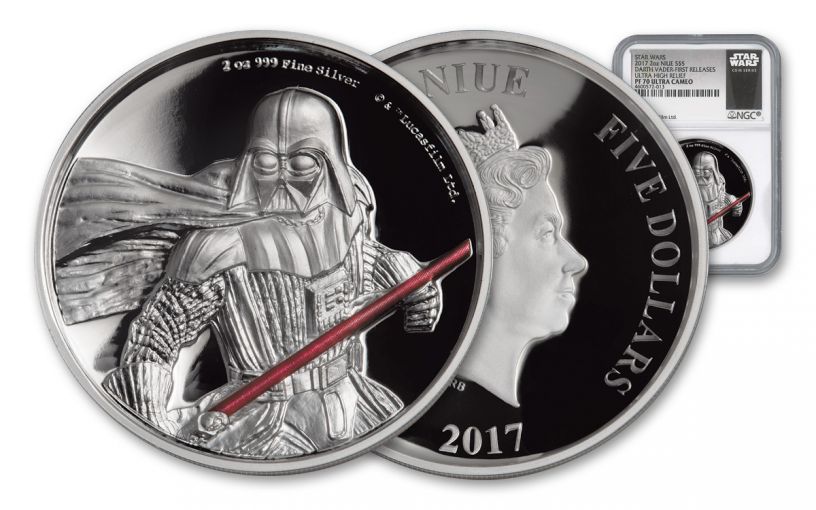 Availability: In Stock
This item will ship within 2 business days.
Item #
315914
CC Payments as low as
$149.50 / month
Add to Wish List Add to Wish List Wishlist is for registered customers. Please login or create an account to continue. Add to Compare

The Force is Strong With This Coin!

He’s rated as IGN’s all-time #1 villain ever, yet somehow we all still want to see Darth VaderTM redeemed. Since his debut in 1977’s Star Wars: A New Hope, Vader has been the face of the Star Wars saga. Millions of fans around the world have followed his tragic story as he rose from being an orphaned child to becoming the most feared Sith lord in the galaxy. He’s a master in the Dark Side of The Force, an omnipresent power that gives Jedi Knights powers and skills beyond those of mortal creatures.

Now you can bring the former Jedi home in this magnificent coin struck in two ounces of 99.9% silver. This officially licensed Star Wars coin features truly superb detail as befitting a coin graded in perfect Proof 70 (PF70) condition by the Numismatic Guaranty Corporation (NGC). Its Ultra High Relief details show every ripple in Vader’s clothes from the detailed lines in his sleeves to the curves of his familiar helmet. As an added feature, the light saber Vader is wielding on the image has been colorized in red – a stunning addition that adds another element to an already exciting coin.

As if that wasn’t enough, your coin has also been certified by NGC as being a First Release and comes sealed in a black core holder attesting to that fact! That means your coin is guaranteed to have been struck and received by NGC during the first 30 days of its release. As most collectors know, the first coins from any release display the best strikes as the dies are brand new and not worn in any way. The combination of the perfect Proof 70 condition and the First Release status makes this coin a star in anyone’s collection – and with a limited mintage of just 5,000, it’s a good bet that there are far too few to meet the demand of both coin collectors and Star Wars fans.

Order your coin now or it could end up in the hands of another collector somewhere far, far away!