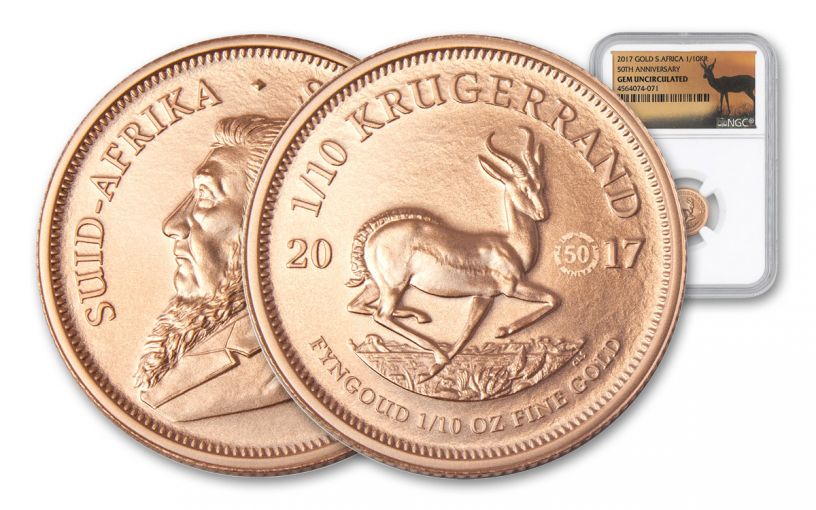 Availability: In Stock
This item will ship within 2 business days.
Item #
313341
Review this product
CC Payments as low as
$149.50 / month
Add to Wish List Add to Wish List Wishlist is for registered customers. Please login or create an account to continue. Add to Compare
Complete your collection with one of these:
Product Description

A 50th Anniversary Milestone for the Ages!

2017 has been an amazing year for the South African Krugerrand. Since 1967, this beloved coin has literally been the world's gold standard for bullion. So, as you can imagine, the Krugerrand's 50th anniversary year is definitely going down in numismatic history! First, the South African Mint surprised collectors around the world with the launch of the first ever Silver Krugerrand. Then, the mint delivered another gift with the release of the first Platinum Krugerrand. But now, it's time to go back to the Krugerrand's precious metal of choice -- gold! And this limited edition 2017 1/10-ounce Gold 50th Anniversary Krugerrand is truly something special!

2017 has been a year full of phenomenal firsts for the South African Krugerrand, and collectors everywhere have been rushing to secure as many releases as they can. With this piece of coin history at an incredible value, you can be part of this elite group. But don't wait -- this opportunity can disappear with the blink of an eye (or the leap of a springbok)! Make this 1/10-oz 50th Anniversary Uncirculated Gold Krugerrand yours today!