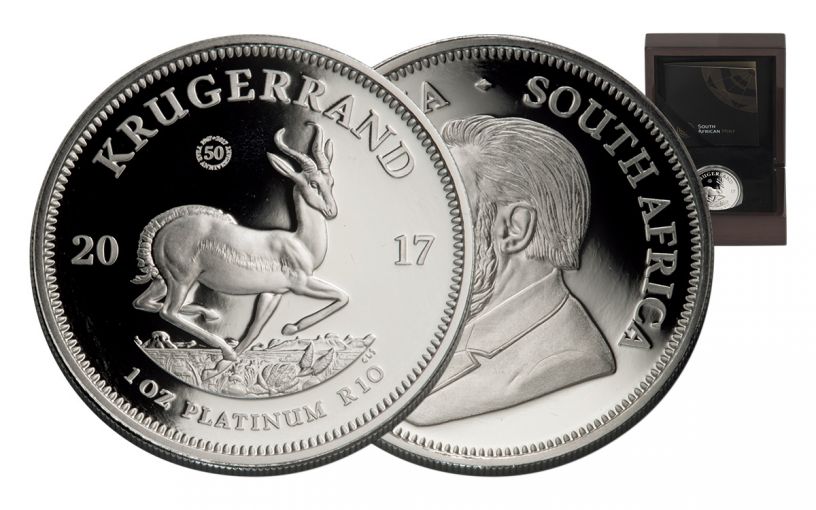 Availability: Out of Stock
Discontinued Product
Item #
309522
Add to Wish List Add to Wish List Wishlist is for registered customers. Please login or create an account to continue. Add to Compare

The First, Last and only Platinum Krugerrand EVER!

The South African Krugerrand has been the literal gold standard for global bullion since 1967. And, as you can imagine, the fiftieth anniversary of this iconic coin's debut wasn't about to come and go quietly. In 2017, the South African Mint stunned the world with the launch of the first ever Silver Krugerrand -- one of the most anticipated coin releases of the year. Soon after, the Gold Krugerrand for 2017 debuted with a reinvigorated and refined design. But that was nothing compared to this next act . . .

One of the World's Rarest Metals, Transformed into the World's Most Popular Bullion Coin!

Introducing a coin that South African Mint officials have emphatically confirmed will be a one-year-only event -- the Platinum Krugerrand Proof! If you're familiar with precious metals, you know that the meeting of platinum and Krugerrand has been a long time coming. Even though platinum is15 times rarer than gold, South Africa is home to three of the world's four primary platinum mines, making it a perfectly appropriate canvas for this new set of Krugerrand Proofs.

Featuring former South Africa President Paul Kruger on one side and the iconic Springbok antelope on the other, these Platinum Krugerrand Proofs share the same details and designs as their gold and silver forbearers. However, these special proofs hold a few additional secrets!

That's right -- only 2,017 of these proofs will be produced by the South African Mint. That, and the fact that these are confirmed to be the only Platinum Krugerrands to be minted EVER, makes this an once-in-a-lifetime event. Whether you're looking to complete your own triple crown of 2017 Krugerrand Proofs or to secure a piece of history for future generations, now is the time to make this your very own. Don't wait another moment -- order your 2017 1-oz Silver Platinum Krugerrand Proof today!