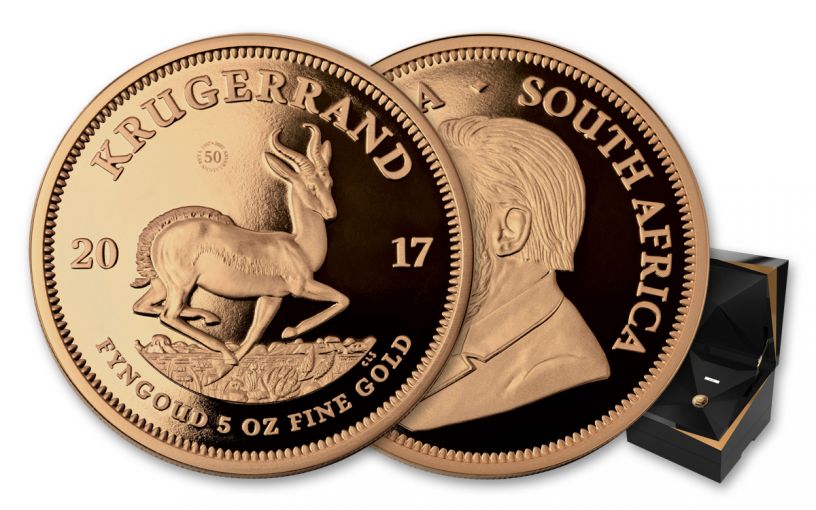 Availability: Call-In Only
This item is only available on a Call-In basis. Please call 1-800-510-6468 to speak to a representative.
Item #
315564
Add to Wish List Add to Wish List Wishlist is for registered customers. Please login or create an account to continue. Add to Compare

The South African Mint really outdid itself with these coins. In addition to being the first-ever 5-oz Gold Krugerrand, each coin has also been struck with a very special mint mark celebrating the Krugerrand's 50th anniversary. The special “privy” mark can be seen floating above the iconic springbok’s back on the coin’s reverse.

Using specially prepared and polished dies, the artists at the South African Mint struck each coin multiple times, resulting in frosty designs that hover over shimmering fields for a level of detail and eye appeal not found in typical circulating coinage. How appealing are these designs? They’re so sharp and well struck that each gleaming 5-oz gold proof has been certified by Numismatic Guaranty Corporation (NGC) as being in near-perfect Proof-69 Ultra Cameo (PF69 UCAM) condition!

Your 2017 South Africa 5-oz Gold Krugerrand Proof will be sonically sealed in an acrylic holder with a black display core. You'll also receive an officially numbered mint certificate of authenticity and mint-authorized packaging. To get this historic 50th anniversary year proof, you'll need to act fast -- only 500 will be minted. Order yours today!

To get your 2017 South Africa first-ever 5-oz Gold Krugerrand in perfect Proof-69 Ultra Cameo condition you’ll have to order now while you still can. With a limited edition of just 500 specially mint-marked 50th anniversary proofs, not many are left, so reserve yours today!