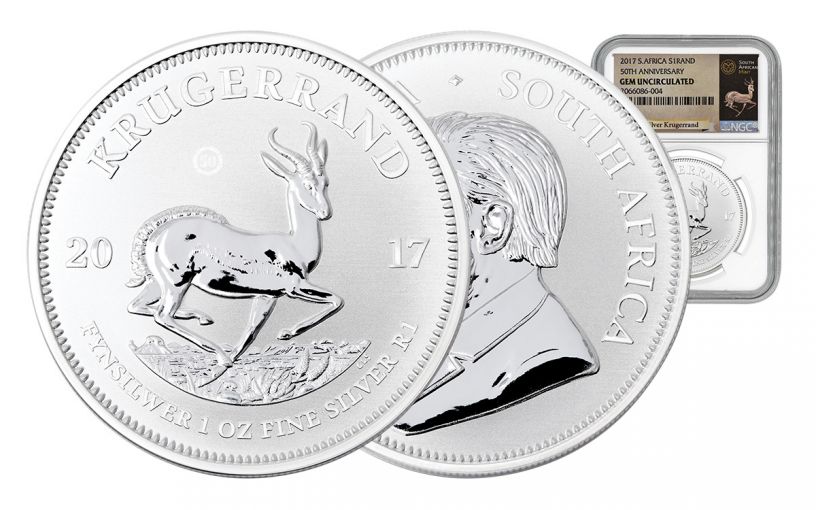 Availability: Out of Stock
This item is currently Out of Stock. Please sign up to be notified if this product becomes available.
Item #
299823
Add to Wish List Add to Wish List Wishlist is for registered customers. Please login or create an account to continue. Add to Compare

A Monumental Event 50 Years in the Making -- the FIRST EVER Silver Krugerrand!

The name "Krugerrand" has been synonymous with wealth, prosperity and riches for 50 years. First issued in 1967, the South African Gold Krugerrand holds the title of being the world's first modern gold bullion coin. Today, it's still the most widely traded gold coin on the planet! Every other gold coin that has followed, including American Gold Eagles and Canadian Gold Maple Leafs, owes their very existence to South Africa's "Grandfather of Gold."

However, while other countries have produced silver versions of their bullion coins, collectors have only dreamed of owning official Krugerrand coins in pure silver. Fortunately, the wait ends today! To mark the 50th anniversary of the Gold Krugerrand, South Africa has authorized the FIRST EVER production of limited edition one ounce Silver Krugerrands.

Produced by the award-winning South African Mint, each Silver Krugerrand is official legal tender, struck in a full ounce of 99.9% pure silver. This Krugerrand bears the same design as the original gold coin -- former South African President Paul Kruger on one side and the iconic Springbok antelope on the other. In addition, each one ounce silver coin features the milestone Krugerrand 50th anniversary 2017 date and mint mark.

The dies for these 2017 Silver Krugerrands have been digitally enhanced through innovative laser-etching technology, producing coins with razor-sharp details, polished gleaming highlights and satiny frosted shading never before seen on a Krugerrand. In addition, your 2017 Silver Krugerrand will also come with these brilliant features:

While the Krugerrand has never been struck in silver before, once the 50th anniversary is over, it may never happen again! Order now, or miss out on what could be your first and perhaps ONLY opportunity to add one to your collection!