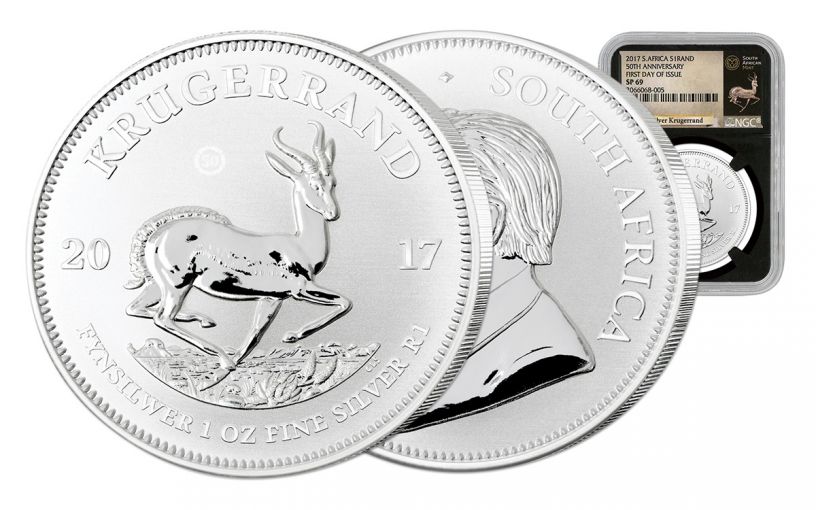 Availability: Out of Stock
This item is currently Out of Stock. Please sign up to be notified if this product becomes available.
Item #
299750
Add to Wish List Add to Wish List Wishlist is for registered customers. Please login or create an account to continue. Add to Compare

A Monumental Event 50 Years in the Making – The FIRST EVER Silver Krugerrand!

This was a massively hot release, so not only were we were surprised to find a small supply of these coins, but we were blown away by the fact that they were certified by the Numismatic Guaranty Corporation (NGC) as being in near-perfect Specimen-69 (SOP69) condition, both as Specimen-69 (SP69) condition, a distinction that means these almost-flawless coins showcase impressive full strikes and indistinguishable imperfections – well above and beyond the quality of the vast majority of coins in the series. Not only that, but NGC also certified that they are First Day of Issue (FDI) coins, meaning they were received by NGC or an NGC-approved depository by the release date or on the business day within 24 hours of the official release date!

The name “Krugerrand” has been synonymous with wealth, prosperity and riches for 50 years. First issued in 1967, the South African Gold Krugerrand holds the title of being both the world’s first modern gold bullion coin AND the most widely traded gold coin on the planet, inspiring similar gold bullion series around the globe. However, while other countries have produced silver versions of their bullion coins, collectors had only dreamed of owning official Krugerrand coins in pure silver – that is, until the release of the first-ever Silver Krugerrand in 2017.

This 2017 Silver Krugerrand bears the same design as the original gold coin – former South African President Paul Kruger on one side and the iconic Springbok antelope on the other. In addition, each legal-tender one-ounce silver proof features the milestone Krugerrand 50th anniversary 2017 date and mint mark.

Whether you’ve already brought a Silver Krugerrand home to your collection or you’ve been waiting to make one your own, now is the perfect time to join the party! But don’t wait much longer because we were lucky to come across a small supply of these coins certified by NGC, and who knows when – of even if – we will find more like them!

What a remarkable find! The 2017 One-Ounce Silver Krugerrand —the world’s FIRST-EVER silver Krugerrand from South Africa – and in almost flawless Specimen-69 First Day of issue condition! Order yours now!