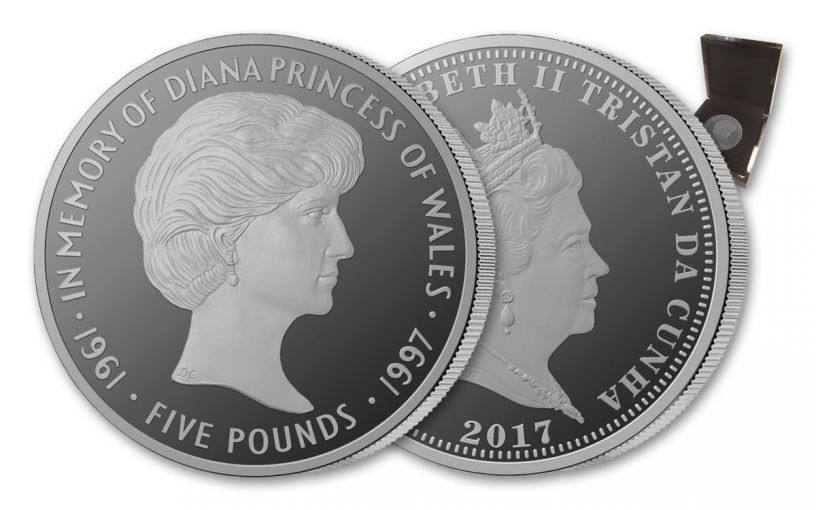 Availability: Out of Stock
This item is currently Out of Stock. Please sign up to be notified if this product becomes available.
Item #
313993
Add to Wish List Add to Wish List Wishlist is for registered customers. Please login or create an account to continue. Add to Compare

A Stunning Celebration of a Lasting Royal Legacy!

There are tragic moments when the world just seems to stop turning. For many, one of those moments occurred on August 31, 1997. The evening before, a horrific car crash at the Pont de l'Alma tunnel in Paris had left two dead and two severely injured. Among the dead was famed film producer Dodi Fayed, among the injured was Diana, Princess of Wales. Unfortunately, Diana's internal injuries would prove to be too massive, and the Princess passed away early the next morning. The world would spend the next days, weeks, months and years mourning her tragic death.

20 years on, the sensationalism of that tragedy is eclipsed by the lasting effects of Princess Diana's kindness and humanity. Above all, Diana Spencer was a loving mother to her two sons -- instilling a legacy of generosity that can be seen in today's charitable works of both Prince William and Prince Harry. In addition, from the moments after Diana's death to its closing in 2013, the Diana, Princess of Wales Memorial Fund raised millions of dollars for humanitarian charities -- continuing the work she championed around the world. Now, to celebrate her life and influence, the Commonwealth Mint has released this gorgeous One-Ounce Silver Princess Diana Proof!

While Diana's life was tragically cut short at the young age of 36, those years were filled with tremendous purpose and grace. And while 2017 marks the 20th anniversary of her passing, this gorgeous coin brilliantly puts the focus on her life well lived. GovMint.com is the ONLY authorized U.S. distributor for these special proofs, so don't miss out on a great opportunity to bring home this lasting remembrance -- order yours today!