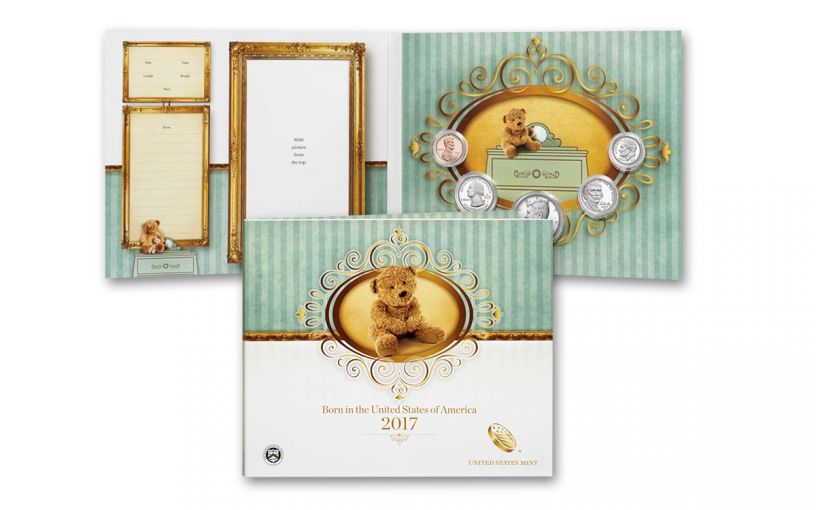 Availability: Out of Stock
This item is currently Out of Stock. Please sign up to be notified if this product becomes available.
Item #
301764
Add to Wish List Add to Wish List Wishlist is for registered customers. Please login or create an account to continue. Add to Compare

For the Newborn in Your Life, Give the Gift That Will Be Treasured Forever!

If you know of a little bundle of joy that's going to appear in 2017, you're probably also thinking about a gift for the new arrival. While the needs for new parents can be many, plenty of the items on their wish list will get used up or worn out as the baby grows up. Of course, those things are essential, but sometimes you need to give a gift that immortalizes what will be the most important year in the newborn's life -- the year of their birth!

Fortunately, GovMint.com has you covered! Introducing the United States Mint Birth Set for 2017. To start, this lovingly-created set proclaims that your newest favorite child is "Born in the United States of America -- 2017." And who better to appear on the cover than the most American of toys, an adorable Teddy Bear? Inside, you'll find a built-in frame for the new baby's photo, as well as a place to write down the kid's first statistics.

But the real gift comes in the form of a 5-coin selection of 2017 proofs, including a Lincoln Cent, a Jefferson Nickel, a Roosevelt Dime, a Kennedy Half-Dollar and an Effigy Mounds National Monument Quarter (the first of the America the Beautiful Quarters® to be released in 2017). Each proof is the product of specially polished planchets that are struck twice to produce gleaming mirrored surfaces and distinctly defined details. In addition, each San Francisco-struck coin features the "S" mint mark.

When it comes to giving a shower or arrival gift that will be kept and cherished for a lifetime, we can't think of anything more perfect than this 2017 U.S. Mint Birth Set. Know of one (or a few) that are on the way? Place a few in your cart and order today!