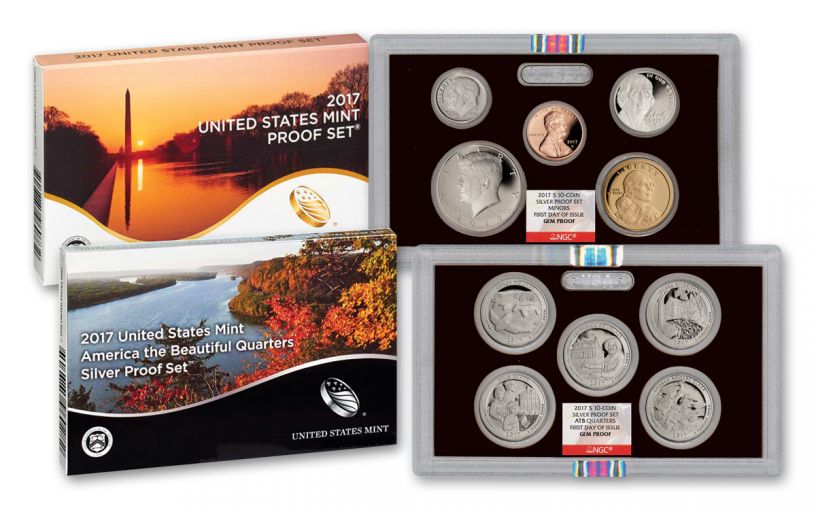 Availability: In Stock
This item will ship within 2 business days.
Item #
311378
Review this product
Add to Wish List Add to Wish List Wishlist is for registered customers. Please login or create an account to continue. Add to Compare
Complete your collection with one of these:
Product Description

Each year, the United States Mint's Proof and Uncirculated coin sets make their way to hundreds of thousands of fans each year. However, for many collectors this is just the bellwether for the real treat to come. Released soon after the two sets make their debut is the annual Silver Proof Set. Harkening back to the U.S. Proof Sets produced between 1936 and 1964, these Silver Proof Sets feature Kennedy Half Dollars, Roosevelt Dimes and Washington Quarters struck in 90% pure silver. Since 1992, these Silver Proof Sets have been produced with smaller mintages than their proof counterparts. Combine those limited production numbers along with the superb quality of their strikes and shimmering beauty of their silver and you can see why these sets are the collectors' choice!

So, what's in this year's set? The first acrylic lens starts with stunning proof versions of the standard Lincoln Cent and Jefferson Nickel joined by the year's Native American Dollar featuring Sequoyah, the creator of the monumental Cherokee Syllabary that established new avenues for intertribal communication in the early 1800s. Then this set breaks away from the pack with proof versions of the Roosevelt Dime and Kennedy Half-Dollar, each struck in 90% pure silver. The second acrylic lens in your 2017 Silver Proof Set features all five of the year's America the Beautiful Quarters, also struck in 90% pure silver:

-       The natural wonders and rich history of the Ozark National Scenic Riverways in Missouri, symbolized by the park's Alley Mill, built in1894

-       New Jersey's lasting tribute to the immigrants that arrived on the shores of Ellis Island during the late 1800s and early 1900s, now part of the Statue of Liberty National Monument, and

-       George Rogers Clark National Park in Indiana, named for the Lieutenant Colonel that led a surprise capture of Fort Sackville on February 25, 1779, limiting British control during a crucial time in the American Revolution

Since each set is struck in proof condition at the San Francisco Mint using specially polished dies and selected planchets, all of your proofs will feature the "S" mintmark. In addition, this Silver Proof Set is graded Gem Proof and certified First Day of Issue by Numismatic Guaranty Corporation (NGC). That means each acrylic lens in the set will feature tamper-proof seals applied by NGC, as well as special labels declaring your set's characteristics! Finally, your set will come in its original, visually-rich U.S. Mint packaging along with a certificate of authenticity. Like we mentioned before, these sets are produced in markedly lower mintages than the more widely available Proof Sets. Now that they've been released from the U.S. Mint, don't wait another moment -- secure your U.S. Mint Silver Proof Set for your collection today!