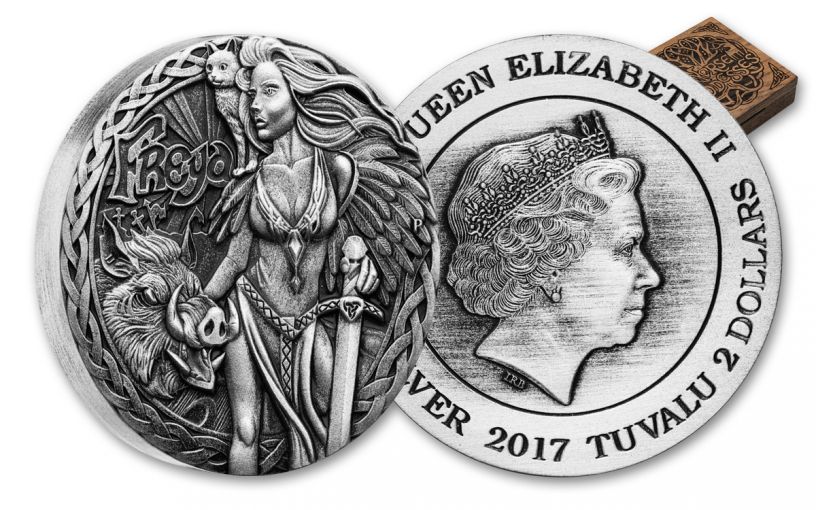 Availability: Out of Stock
This item is currently Out of Stock. Please sign up to be notified if this product becomes available.
Item #
308496
Add to Wish List Add to Wish List Wishlist is for registered customers. Please login or create an account to continue. Add to Compare
Recommended Products
Product Description

Even the Vikings had their soft side, though from the battle-hardened appearance of the Goddess Freya depicted on this coin – the FIRST release in the Perth Mint’s Norse Goddesses series – one would be hard put find it. You see, Freya is actually the Norse goddess of love, though that’s just her day job. She’s also the goddess of sex, lust, beauty, sorcery, fertility, gold, war and death.

To capture Freya in all her Viking glory, The Perth Mint struck this truly magnificent coin in high relief so mind-boggling that it will knock your horns off! And to further bring out every detail in the magnificent design, a special antiqued finish was added to give it a unique appearance. The gritty texture creates dark and light shadows across the surface of the coin that makes it look and feel like an ancient artifact from an age when the Vikings plundered up and down the coastlines of Europe. As a result of this treatment, the appearance of each coin may vary, making no two coins exactly alike!

Minted in two full ounces of 99.99% pure silver, this 2017-dated coin measures 40.6 mm in diameter so every nuance of the design is bold and striking. The legend of Freya is all there for anyone to see – from her alluring outfit and its magical cloak made from falcon feathers to her boar Hildisvíni – there’s no mistaking the essence of Freya. Armed with a trusty battle sword and joined atop her shoulders by one of the cats that pull her chariot, Freya is the epitome of a Vikings warrior goddess.

In Old Norse, the name “Freya” means “lady,” and this is one lady can’t refuse. But with only 2,000 of these coins ever struck for worldwide release, you’d better hurry before she heads off on a Viking raid without you! With so few coins struck for worldwide release, if you don’t order soon it would be like getting left up Valhalla Creek without a sword! Add the 2017 Tuvalu Two-Ounce Silver Norse Goddess Freya High Relief Antiqued Coin to your collection today!

Celebrate Norse mythology with the 2017 Tuvalu Two-Ounce Silver Freya Antiqued High Relief Coin, the first coin in the Norse Goddesses series from Tuvalu and the Perth Mint. Click one to your cart now to avoid disappointment later!