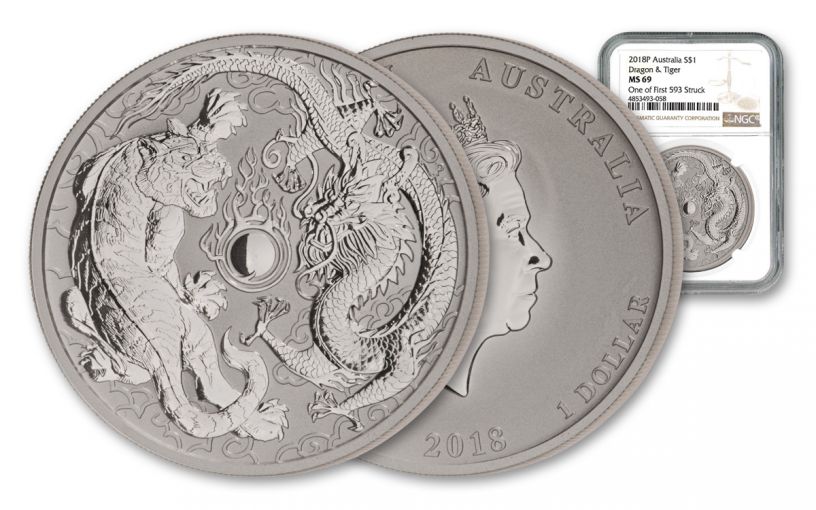 Availability: Out of Stock
This item is currently Out of Stock. Please sign up to be notified if this product becomes available.
Item #
338261
Add to Wish List Add to Wish List Wishlist is for registered customers. Please login or create an account to continue. Add to Compare

Struck in a full ounce of 99.99% silver, the legal tender coin pays tribute to the Tiger and Dragon on a gleaming one-dollar coin rife with symbolism. The 2018 Australia Tiger and Dragon One-Ounce Silver Coin not only portrays the tiger and dragon matched in a never-ending contest of wills, but it shows the reason for the conflict: the flaming pearl of knowledge! The detail is so remarkable that it almost seems like you’re holding a vintage Chinese bas relief carving that depicts the tiger and dragon continuously circling the flaming pearl of knowledge in a perpetual dance of symmetry.

The follow-up to the Perth Mint’s wildly successful 2017 Dragon and Phoenix release, the 2018 Australia Tiger and Dragon One-Ounce Silver Coin is from a maximum worldwide mintage of just 50,000 – a mintage that has been announced as a complete sell out at the mint! In addition, your coin has been graded by the Numismatic Guaranty Corporation (NGC) to be in near-perfect Mint State-69 (MS69) condition. In addition, NGC has also certified your Tiger and Dragon Silver Coin as being among the first 593 pieces struck by the mint! Each coin will come sonically sealed in a protective capsule with a special brown label that states the size of the “first struck” edition.