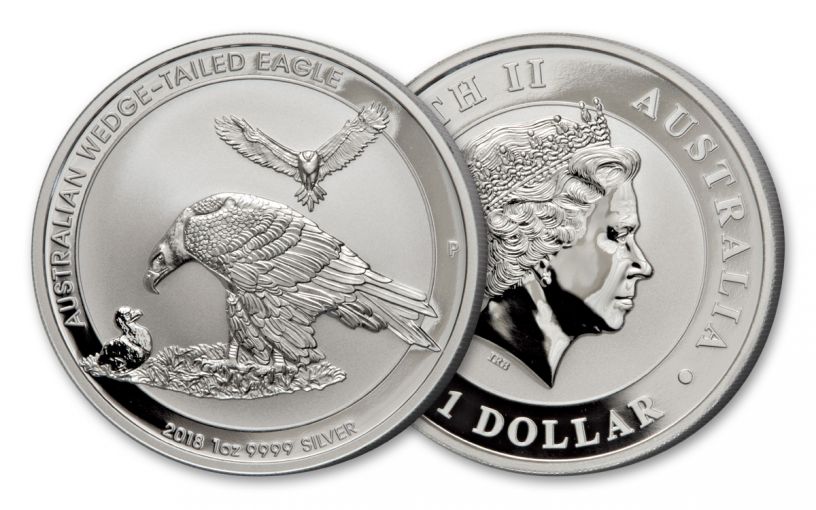 Availability: Out of Stock
This item is currently Out of Stock. Please sign up to be notified if this product becomes available.
Item #
320879

Celebrating the Fifth Issue of a Historic Series

In 2014, John Mercanti and the Perth Mint made numismatic history with the introduction of the Wedge-tailed Eagle Series. That was the first time that a former Chief Engraver of the United States Mint partnered with a foreign mint on a coin. That partnership produced what immediately became a favorite issue among collectors. Since then, Mercanti's initial design was repeated on the second issue and a second design appeared on the third and fourth issues. This 2018 One-Ounce Silver Australia Wedge-tailed Eagle will be a prized piece for collectors not only because of the beauty of the design but also because this is the first issue in the series to have a one year only design. And what’s more, it has been announced as being completely sold out at the mint!

The bald eagle has long appeared on American coins, so John Mercanti, who created the eagle design that has appeared on the Silver Eagle since the coin's debut in 1986, was a natural fit to design a coin celebrating Australia's largest bird of prey, the wedge-tailed eagle. Mercanti's skill in design and engraving and the Perth Mint's exceptional production quality combined to bring about this beloved series. This one year only family of eagles design is sure to have particular appeal to collectors. With a mintage of only 50,000 pieces, your chance to own this 2018 One-Ounce Silver Wedge-Tailed Eagle will not be around for long, so order yours now at GovMint.com!