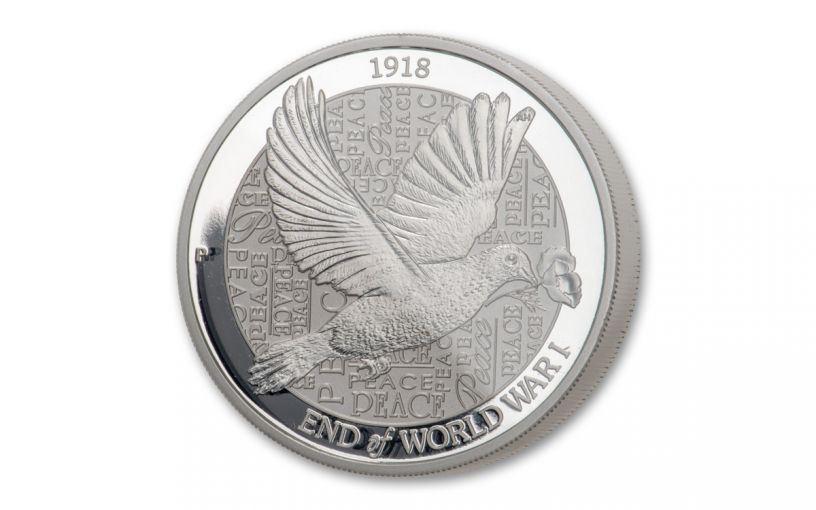 Availability: Out of Stock
This item is currently Out of Stock. Please sign up to be notified if this product becomes available.
Item #
344551

The Dove of Peace Brings an End to World War I

One hundred years ago on the 11th hour of the 11th day of the 11th month, millions of soldiers laid down their arms amid the beautiful sound of silence drifting across the crooked trenches snaking across Europe. World War I was finally over and peace at long last settled over the world. The date was November 11, 1918 – Armistice Day – a day that has lived on in tribute to the millions of people who lost their lives in “the war to end all wars.”

To commemorate the 100th anniversary of the solemn milestone, Australia’s world-renowned Perth Mint issued a spectacular double-thick Piedfort coin struck in two full ounces of highly-pure 99.99% silver. It’s a hefty tribute to one of the costliest wars in human history with a poignant design full of rich symbolism. It features the Dove of Peace on the reverse with a poppy in its beak against a background engraving of the word “Peace” repeated in many different typestyles.

Why the poppy? It’s a reference to the red field poppies that sprouted from the graves of the fallen soldiers in Flanders on the Western Front in Belgium. The scene was described in vivid detail in the poem In Flanders Fields by Canadian physician John McCrae and published in 1915 during the second year of the conflict. Today, poppies are worn on November 11th as a remembrance of all soldiers killed in battle.

Just 10,000 of these splendid Brilliant Uncirculated coins will be struck for worldwide release – an exceptionally small bullion edition from the Perth Mint, and one that will have collectors, history buffs and silver stackers all vying to get their hands on them. Make sure you don’t miss out; click one to your cart right now!

Celebrate the 100th anniversary of the end of World War I with this 2018 Australia Two-Ounce Silver Piedfort Dove Coin. It’s a beautiful coin that perfectly captures the hopes and dreams of all who fight in wars – peace.