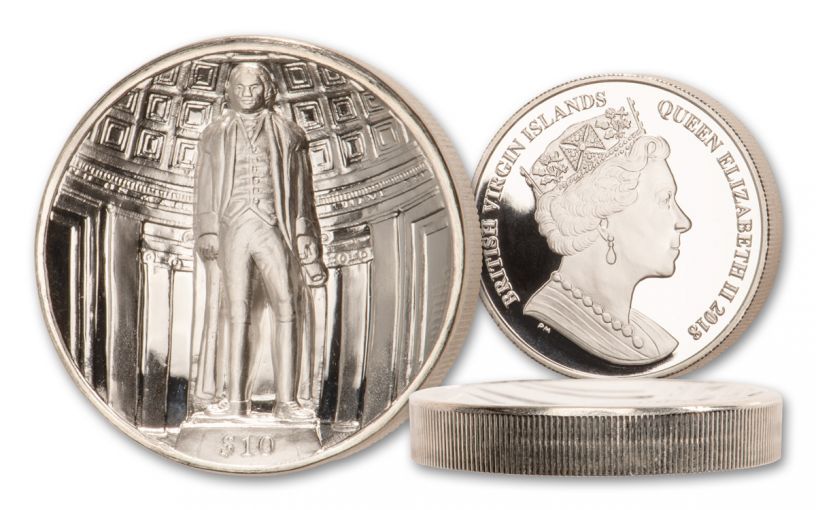 Availability: Out of Stock
This item is currently Out of Stock. Please sign up to be notified if this product becomes available.
Item #
341101
Add to Wish List Add to Wish List Wishlist is for registered customers. Please login or create an account to continue. Add to Compare

The Jefferson Memorial in the Palm of Your Hand

As the author of America’s Declaration of Independence and the nation’s third President, Thomas Jefferson was a man of many accomplishments. While there are many tributes and monuments to this great American and his legacy, none are as highly regarded than the Jefferson Memorial. Dedicated in 1943 by President Franklin Delano Roosevelt, who personally laid the cornerstone for the structure in 1934, the memorial is not only an immortal tribute to the former president, it’s also one of the most popular monuments in Washington, D.C.

Now you can keep a tribute to this important monument close to your heart with an exciting ultra-high-relief coin with incredible vivid detail. Struck by the prestigious British Pobjoy Mint in two ounces of 99.9% fine silver, this $10 legal-tender proof from the British Virgin Islands (BVI) displays the memorial in fantastic concave detail. The design of Thomas Jefferson’s bronze statue is the real centerpiece for this coin – it’s faithfully reproduced in such stunning, jaw-dropping detail that you’ll hardly believe your eyes!

The Jefferson Memorial continues to resonate with Americans and people from all over the world, attracting more than 3 million visitors every year. But while the memorial is visited by millions each year –only a few hundred will ever be able to bring this impressive coin home. That’s because the maximum worldwide limited edition for the 2018 Jefferson Memorial Two-Ounce Silver Proof has been set at only 650. With so few struck, there’s no telling how quickly this legal-tender silver coin will sell out. Declare your independence from the hundreds of thousands who will miss out by securing yours today!

Capture the patriotic glory of the Jefferson Memorial with the 2018 Jefferson Memorial Two-Ounce Silver Proof now before this exceptionally small mintage completely sells out! Click one to your cart now to avoid disappointment later!