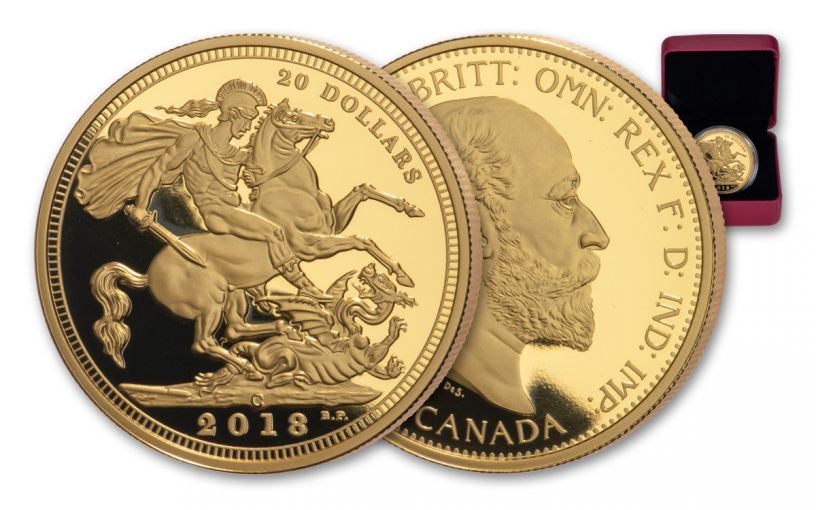 Availability: Out of Stock
This item is currently Out of Stock. Please sign up to be notified if this product becomes available.
Item #
344636
Add to Wish List Add to Wish List Wishlist is for registered customers. Please login or create an account to continue. Add to Compare

When the British Gold Sovereign was first struck in 1817 it was recognized and accepted around the world. It was also one of the most widely struck coins, being minted in several commonwealths including Canada. This 2018 One-Ounce Silver Sovereign from the Royal Canadian Mint resurrects the original Sovereign design that came from the Ottawa Mint between 1908 and 1919, complete with the Canadian “C” mint mark. This is also significant because the Royal Canadian Mint opened its doors for the first time on January 2, 1908 – meaning the 1908 Gold Sovereign was one of the very first coins it ever produced!

Struck in a full ounce of highly-pure 99.99% fine silver, this 110th anniversary coin is now available in Gem Proof condition, meaning it was expertly crafted by the mint from hand-selected planchets, polished dies and multiple strikes to produce beautifully frosted details rising over mirror-like fields. In addition to the key “C” mint mark, this coin’s design features Great Britain’s King Edward VII on the obverse and Benedetto Pistrucci’s famous design of Saint George Slaying the Dragon on the reverse. This legal-tender $20 coin is made even more splendid with the addition of 24-karat gold plating over its entire surface. It’s a marvelous feature that really connects today’s coin with the original Canadian Gold Sovereign struck more than a century ago.

1908 was also the year Canadian author Lucy Maud Montgomery published her novel Anne of Green Gables – a classic piece of children’s literature that takes place in the fictional town of Avonlea on Canada’s Prince Edward Island. In the book, red-haired Anne is a strong-willed young orphan who is intelligent and creative. There’s no ignoring her, and there’s no ignoring this fantastic commemorative issue from the Royal Canadian Mint.

Only 5,000 of these coins have been struck for worldwide release, however, so if you want to add this freshly resurrected coin to your Canadian, world silver, or Sovereign collection you’ll need to act now. Click one to your cart today!