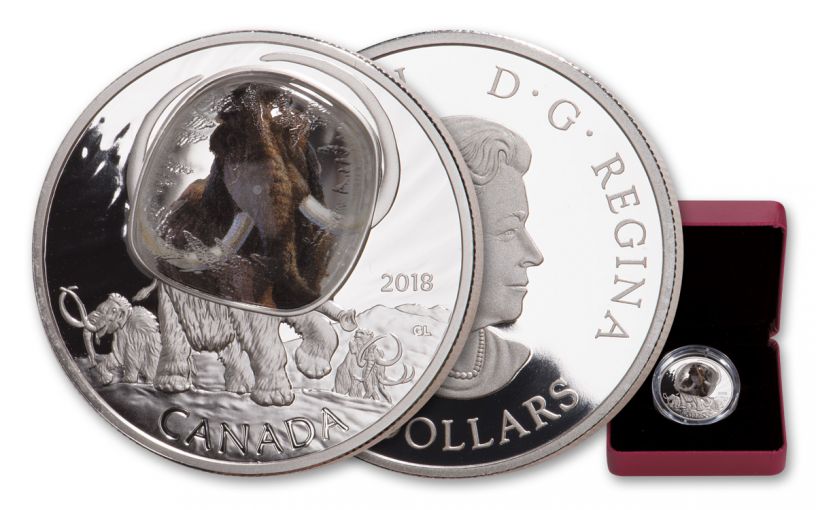 Availability: Out of Stock
This item is currently Out of Stock. Please sign up to be notified if this product becomes available.
Item #
334715
Add to Wish List Add to Wish List Wishlist is for registered customers. Please login or create an account to continue. Add to Compare

According to a team of Harvard scientists, a “de-extinction” effort to creating a woolly mammoth embryo is only a few years away. But if you don’t want to wait that long, check out the Royal Canadian Mint’s new 2018 Woolly Mammoth One-Ounce Silver Proof – you might say it’s a coin 4,000 years in the making!

The first coin in Canada’s “Frozen in Ice” series, the 2018 Woolly Mammoth One-Ounce Silver Proof captures a moment frozen in time through its unique design. The coin’s reverse shows a herd of woolly mammoths tramping across a frozen Ice Age landscape. One of the mammoths has broken away from the herd and appears to be charging at you, its gigantic tusks held high. The image is overlaid with a frosted dome to give you the impression that you’re looking through a frozen ice bubble. To add to the effect, the edges of the bubble have a simulated frost effect and the portion of the mammoth beneath the bubble is colorized.

The new Frozen in Ice series will feature animals found in Canada during the last Ice Age. Perhaps the most well-known of these great beasts is the woolly mammoth. Herds of the gigantic elephant-like animals roamed across North America throughout the Pleistocene Era. Weighing up to 18,000 pounds and standing 10 feet high, mammoths were covered in dense moisture-resistance hair that could be as long as three feet. They used their massive tusk to root up food and ward off predators. And, while saber tooth tigers and prehistoric wolves often preyed upon young and weak mammoths, it was man who was the mammoth’s biggest threat and ultimately hunted it out of existence about 12,000 years ago.

Thanks to the Canadian Royal Mint, the mammoth is back! Each 2018 Woolly Mammoth Silver Proof is struck in an ounce of 99.9% silver and is $20 legal tender in Canada. Plus, your coin has been certified and graded by the Numismatic Guaranty Corporation (NGC) to be in exquisite Gem Proof condition. This mammoth-sized 38 mm silver proof is limited to just 5,000 coins so don’t get left out in the cold – orders your today!

With only 5,000 of these Canada Woolly Mammoth Once-Ounce Colorized Silver Proofs available for worldwide release, our supply will be extinct in no time. Add one to your cart today!