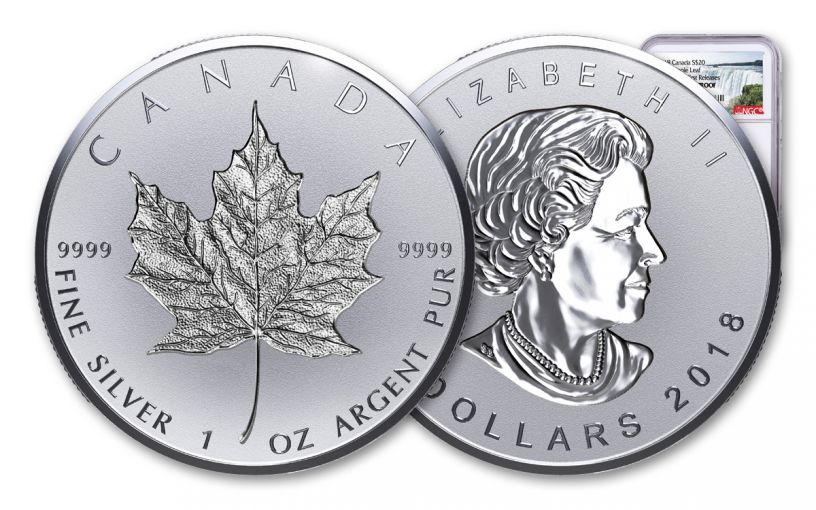 Availability: Out of Stock
This item is currently Out of Stock. Please sign up to be notified if this product becomes available.
Item #
332211
Add to Wish List Add to Wish List Wishlist is for registered customers. Please login or create an account to continue. Add to Compare
Product Description

2018 marks the 30th anniversary of Canada’s Silver Maple Leaf series, and so the Royal Canadian Mint has issued the world’s FIRST Double Incuse Silver Maple Leaf, with designs struck below both surfaces of the coin! In addition, this edition of the Double Incuse Silver Maple Leaf comes struck in Reverse Proof-70 (PF70) condition by the Numismatic Guaranty Corporation (NGC), with frosty fields and reflective designs. As an added feature, your coin has also been certified as a First Release, meaning it was struck and received by NGC during the first 30 days of its release!

Minted in a full Troy ounce of 99.99% pure silver, each coin features the mint’s new MINTSHIELDTM surface protection, which reduces the white “milk” spots that often appear on silver bullion coins. Don’t miss out on this first-ever release. Secure yours now in Gem Proof condition!

For those who love the Maple Leaf series, this coin is a must! From its use of four-nine fine silver to the intricate design detail, the Royal Canadian Mint (RCM) continues to keep the Silver Maple Leaf at the fore of collectors’ minds. This 2018 Canada $20 Silver Double Incuse Maple Leaf Reverse Proof NGC PF70 First Releases design also represents the first time in five years that the RCM has offered an anniversary issue, and it will be at least another five years until it does so again, so order this coin today at GovMint.com!