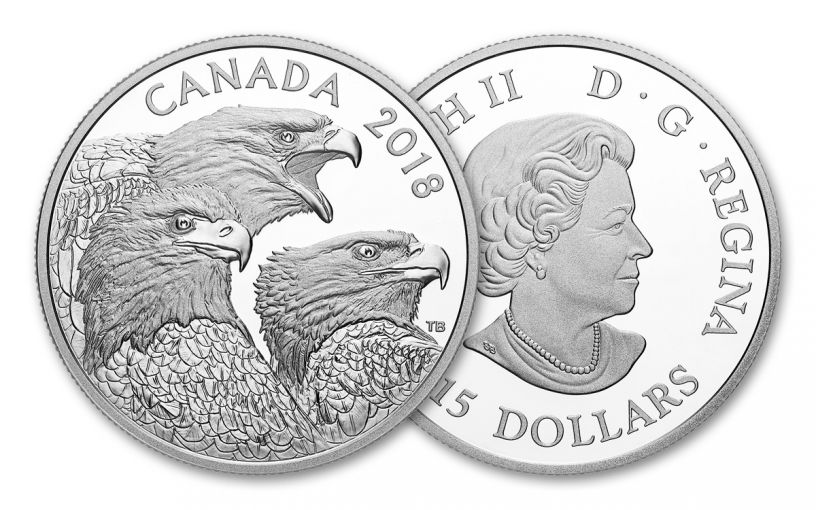 Availability: Out of Stock
This item is currently Out of Stock. Please sign up to be notified if this product becomes available.
Item #
334501
Add to Wish List Add to Wish List Wishlist is for registered customers. Please login or create an account to continue. Add to Compare

Everyone knows that the Bald Eagle is the national bird of the United States. It appears everywhere from coins to flags to 4th-of-July car advertisements. But it’s also a uniquely Norther American bird of prey with a range not just over all of the lower 48 states, but across Canada and Alaska as well. In fact, British Columbia on Canada’s west coast boasts the second largest Bald Eagle population in the world trailing only in Alaska in total numbers!

It’s no surprise then that the Royal Canadian Mint chose the Bald Eagle as the subject of a spectacular new one-ounce silver coin struck in pure 99.99% silver. The 2018 Canada Magnificent Bald Eagles One-Ounce Silver Proof pays tribute to Canada’s largest bird of prey with a classic design that deftly captures the Bald Eagle’s indomitable spirit. The design on this legal-tender proof actually shows three Bald Eagles in various poses. The detail is so exquisite that the eyes of each eagle seem to pop off the surface of the coin!

Besides Alaska and Canada, Bald Eagles have been sighted in all 48 contiguous states and as far south as Mexico. With an estimated 70,000 birds, more than half of the world’s total Bald Eagle population lives in Alaska. The second most populous region is in British Columbia with 20,000 eagles. Bald Eagles are most numerous outside of Alaska and British Columbia in Florida, Minnesota and Wisconsin.

The Royal Canadian Mint has set the maximum worldwide edition limit for the 2018 Canada Magnificent Bald Eagles One-Ounce Silver Proof at only 5,500 – a number far too low for all of the Canadian and United States collectors who would like to get their hands on these coins. Each proof will also come beautifully displayed in an official presentation box and accompanied by a numbered certificate of authenticity.

These eagles have landed, but with such a small edition limit who knows for how long! Don’t let these magnificent silver coins fly away, add one to your cart today!