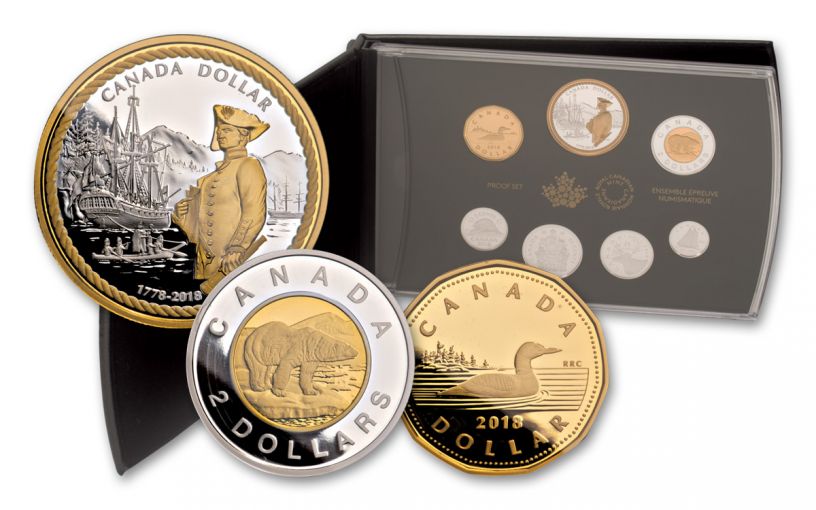 Availability: Out of Stock
This item is currently Out of Stock. Please sign up to be notified if this product becomes available.
Item #
320957
Add to Wish List Add to Wish List Wishlist is for registered customers. Please login or create an account to continue. Add to Compare
Product Description

Relive the Adventures of Captain Cook

Captain James Cook (1728-1779) is one of Great Britain’s most celebrated explorers, having charted more unknown territory than any other navigator of his time. Just one year before his untimely death at the hands of island natives in the South Pacific, he set foot on Canada’s western coast and paved the way for British expansion in the Great Northwest.

This Silver Dollar Proof from the Royal Canadian Mint celebrates the 240th anniversary of Cook’s arrival at a Nootka Sound village, which helped open up international trade and further exploration of Canada’s Pacific coast. When Captain Cook first encountered the native villagers, they were adept at trading fur pelts for shells and iron bars. Those valuable pelts would go on to earn European trading companies a fortune. Today, this coin pays tribute to Cook’s adventure with something more valuable than shells and iron bars: precious silver! Struck in three-quarters of an ounce of 99.99% fine silver and featuring selective gold plating, it features a dynamic design of Cook in the foreground while members of his crew row ashore. Struck in exquisite Proof condition, the designs reflect every ripple in the waves and every button of the good captain’s coat.

This Silver Dollar Proof comes as part of a seven-coin set along with six of Canada’s 2018 legal-tender coins, all struck to a shimmering Proof condition in 99.99% silver: the two-dollar coin struck with a gold-plated inner core, a gold-plated silver dollar, and silver editions of the 50-cent, 25-cent, 10-cent and five-cent pieces.

Secure your set quickly -- there’s no telling how long we’ll be able to hold this famous explorer before he sets sail once more and leaves our vaults forever!

• IMPORTANT MILESTONE EDITION -- Celebrates the 240th Anniversary of Captain Cook’s arrival at Nootka Sound along Canada’s wild Pacific coast in what is today the province of British Columbia.

• LIMITED EDITION – This spectacular legal tender Proof coin is from a limited edition of just 15,000 sets and comes as part of a seven-coin set – all struck to shimmering Proof condition.

• HIGH SILVER CONTENT – The silver dollar is struck in three quarters of an ounce of 99.99% fine silver and is accompanied by Canada’s $2 silver Proof with a gold plated inner core. The set is rounded out by silver editions of all of Canada’s circulating coin designs in shimmering silver from the 5-cent piece all the way up to the $1 coin..

• SELL OUT IS EXPECTED – This set actually has a lower edition limited than its sister coin, the Three-Quarter Ounce Silver 240th Anniversary Silver Proof. Due to its theme among Canadian collectors alone, the Royal Canadian Mint is warning collectors that early demand for these sets may far exceed availability.

Captain Cook’s superior seamanship and surveying skills changed the way the world looked at the Pacific region. Just as he raised the bar for future explorers, so too does this proof set raise the bar for future releases. Get yours now!