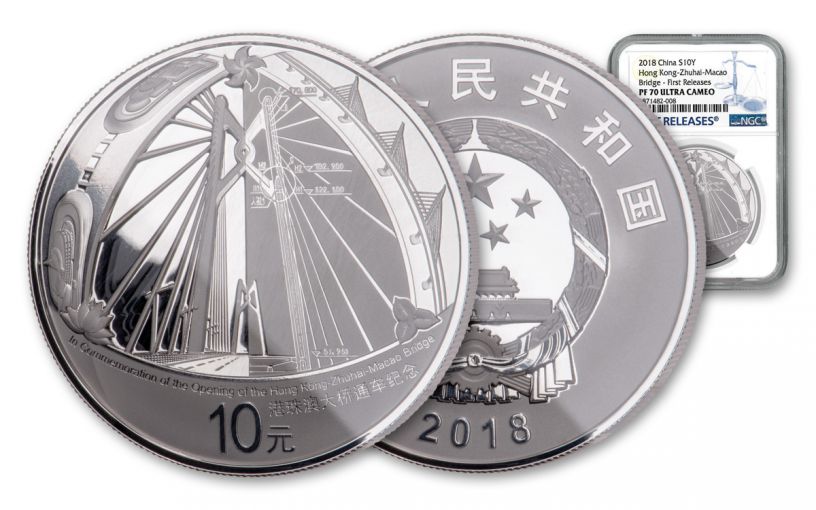 Availability: Out of Stock
This item is currently Out of Stock. Please sign up to be notified if this product becomes available.
Item #
344098
Add to Wish List Add to Wish List Wishlist is for registered customers. Please login or create an account to continue. Add to Compare

Silver Commemorative Lets Your Connect with the World’s Largest Bridge

For decades, the architecture and construction of large, dramatic world-class bridges was associated almost solely with Europe and the United States. That’s all changed in the 21st century with the rise of China’s innovative bridges that are unsurpassed in both quantity and quality. Commanding the respect and awe of experts in the bridge construction industry, the engineering complexity of their design and construction make China’s bridges the envy of the world. That combination of artistic and functional attributes is perhaps best exemplified in the recent completion of the QingZhou Bridge connecting Hong Kong, Zhuhai and Macau in a massive bridge-and-tunnel system that is the largest of its kind in the world.

To commemorative the completion of this mammoth project, the China Mint released a truly impressive proof that pays tribute to the opening of the enormous bridge. Struck in 30 grams of 99.9% silver, the 10 Yuan legal-tender coin features an image of the main tower of the QingZhou Bridge rising from the bridge deck in stunning grandeur. Consisting of a series of three cable-stayed bridges, one undersea tunnel, and two artificial islands, the QingZhou Bridge connects the major cities of Hong Kong, Macau and Zhuhai along a 55-kilometer route across the Pearl River Delta, making it the world’s longest bridge over water.

Your 2018 China QingZhou Bridge Opening Thirty-Gram Silver Commemorative has been graded by the Numismatic Guaranty Corporation (NGC) as being in perfect Proof-70 Ultra Cameo (PF70UC) condition, a distinction that means your perfectly-graded proof will have ZERO imperfections – showing all features and fields exactly as the engraver and mint intended. In addition, NGC has also certified that your proof is a First Releases (FR) coin, meaning that it was among the first struck by the mint and was verified within the first 30 days of issue. Collectors seek out these coins because they are produced with new dies and considered to have sharper strikes and deeper mirrors than those that are struck later. Also, the population of coins labeled First Releases is only a fraction of the total mintage.

When this commemorative proof was released in 2018, the entire edition of 20,000 proofs sold out almost instantly in China, where millions of coin and silver bullion buyers routinely snatch up the best of their own country’s issues. Fortunately for U.S. collectors, we’ve were able to negotiate for a small portion of the edition before it was released, and we’re making these coins available to GovMint customers on a first-come, first-served basis. Each comes with its original mint packaging and certificate of authenticity. Hurry – our small allotment will not last long!

With the red-hot demand by Chinese collectors for their own country’s coinage, it’s amazing we secured any of these commemorative proofs! Add one to your cart today and form a connection between the world’s largest bridge and your collection!