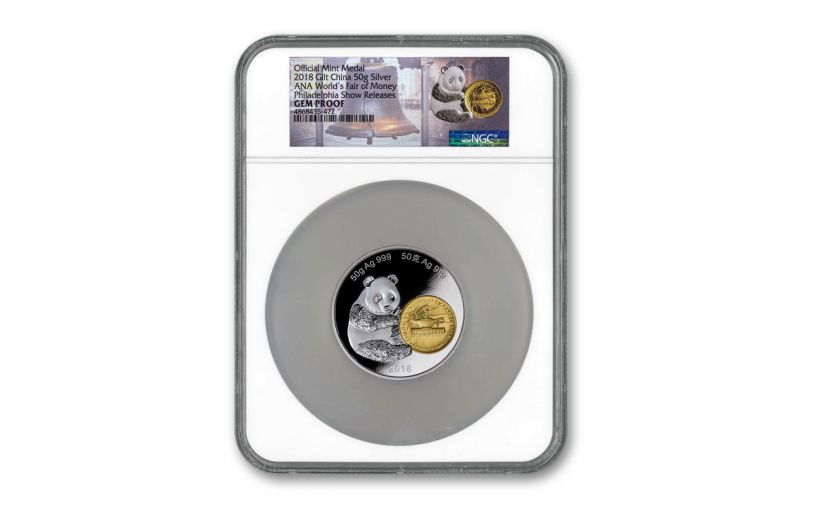 Availability: Out of Stock
This item is currently Out of Stock. Please sign up to be notified if this product becomes available.
Item #
337882
Add to Wish List Add to Wish List Wishlist is for registered customers. Please login or create an account to continue. Add to Compare

The Largest Silver Panda Proof from the 2018 ANA Coin Show

For more than 125 years, the American Numismatic Association’s (ANA) World’s Fair of Money has drawn coin and note collectors from throughout the country and, in recent years, throughout the world. The 127th edition in 2018 was held in Philadelphia, which hosted the event for the first time since 2012. Each year, the ANA show gives collectors the opportunity to gather along with mints, suppliers, and others in the field to discuss their favorite hobby and learn about historic coins, modern minting methods, and everything in between. Many mints take advantage of the opportunity by minting a piece just for the Fair – which is exactly what the China Mint did with these 2018 World Money Fair Panda Proofs.

Now you can get your paws on the largest silver version made available exclusively at the show! This 50-gram silver proof is struck in 99.9% pure silver and is a whopping 50 mm in diameter. The obverse mimics the design used by the China Mint for its 2000 Panda release. The Panda is shown holding the ANA’s “Lamp of Knowledge” logo along with the year date and precious metal content. As an added feature, the ANA logo is gilded in gold. The reverse features a modified version of the Franklin Half-Dollar with Philadelphia’s famous Independence Hall in the background.

Certified as being in gorgeous Gem Proof condition and sealed in an acrylic protective capsule by the Numismatic Guaranty Corporation (NGC), each 2018 ANA Show Panda Proof also bears an exclusive label that designates it as a “Show Release” and First Day of Issue (FDI) piece. This mintage was extremely limited – just 888 – and will never be struck again.

Since 1984, China has been issuing medals for international numismatic shows. The issues have become extremely popular among collectors not only because of their beautiful designs but also because of their exclusivity. That is because mintages of the coins are extremely limited, a stark contrast to the millions of bullion Pandas that are issued. This 2018 Silver ANA Show Release Panda is no exception. Not only is it a low-mintage piece, but it also pays homage to numismatic history, both within the show series and with a famous design related to the country of issue and the host country of the event. Now, this proof is exclusively offered in the United States by GovMint.com, so order yours before it’s too late!

ANA Show Pandas are highly sought-after collectives that tend to sell out quickly. Don’t miss your shot at this 2018 ANA Show Panda!