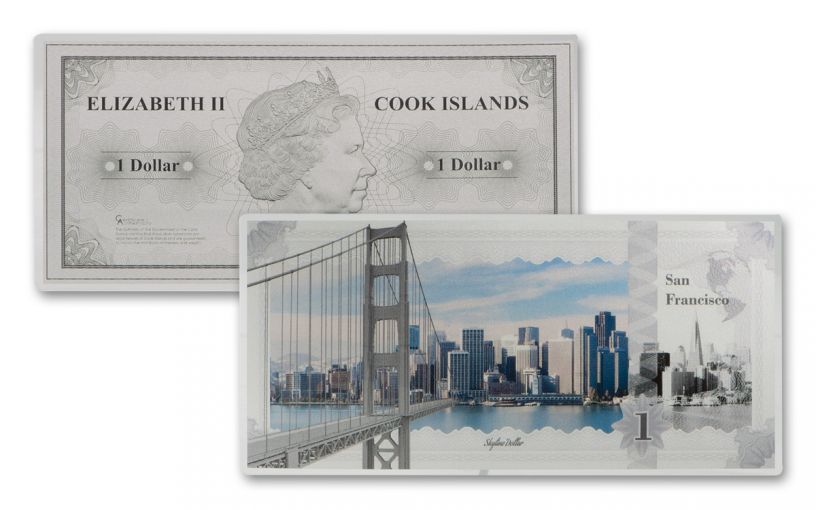 Availability: Out of Stock
This item is currently Out of Stock. Please sign up to be notified if this product becomes available.
Item #
335615
Add to Wish List Add to Wish List Wishlist is for registered customers. Please login or create an account to continue. Add to Compare
Product Description

The Skyline of San Francisco Like You've Never Seen It Before!

San Francisco – The City by the Bay! With its cool summers, fog, steep rolling hills, and eclectic mix of architecture it’s one of the world’s most popular tourist destinations. The Golden State Bridge, cable cars, Fisherman’s Wharf and Chinatown district are just some of the things to see in San Francisco. Founded in 1776 when Spanish colonists established the Presidio of San Francisco, the city is truly one of the great cities of the world.

Now, you can bring the signature sights of San Francisco home with this breathtaking legal-tender silver note – the latest release in the popular "Skyline Dollars" collection. Struck in 5 grams of 99.9% silver by Coin Investment Trust (CIT) on behalf of the Cook Islands, each silver note measures 15x7 centimeters and is only .045 millimeters thick – that's less than half the thickness of an average sheet of paper!

The image you’ll see on this note is amazing! The instantly recognizable image of the Golden Gate Bridge stands in the foreground while behind it is the San Francisco skyline with the city’s Financial District looming in the background. The dramatic view shows such landmarks as the Transamerica Pyramid and the Millennium Tower – the seemingly cursed residential development that, in addition to having no 13th and 44th floors for superstitious reasons, is sinking and tilting. Millennium Tower has sunk 16 inches since it opened in 2009, and now has a two-inch tilt at its base and a six-inch tilt at the top of the tower!