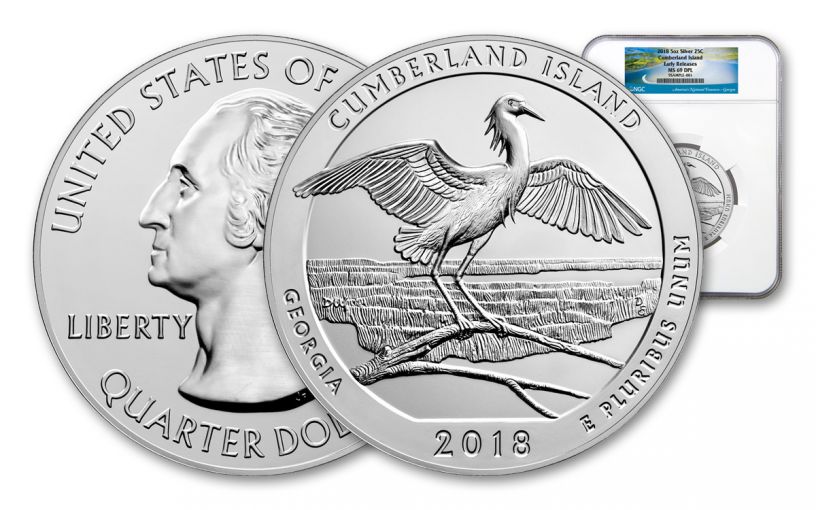 Availability: Out of Stock
This item is currently Out of Stock. Please sign up to be notified if this product becomes available.
Item #
340530
Add to Wish List Add to Wish List Wishlist is for registered customers. Please login or create an account to continue. Add to Compare

Georgia On Your Mind: America the Beautiful Series Celebrates the Beauty of Georgia’s Golden Isles

Accessible only by boat, Georgia’s Cumberland Island National Seashore is famous for its pristine maritime forests, undeveloped beaches and wide marshes. Its timeline chronicles prehistoric, colonial, early American and Gilded Era histories. With more than 36,000 acres of natural wilderness, Cumberland Island is the largest of Georgia's Golden Isles and features a colorful variety of wildlife, particularly migratory waterfowl. The National Seashore was established in 1972 and today thousands of visitors each year enjoy hiking, biking and camping in its pristine wilderness. Now, this fourth issue of 2018 in the America the Beautiful series celebrates the area with this five ounce silver Cumberland Island National Seashore coin.

The Cumberland Island National Seashore in Georgia is a perfect example of a coin that presents collectors with a scene of America’s natural beauty that would likely be overlooked otherwise. Although the America the Beautiful collection is considered bullion, its five releases every year mean that each new release is only available for so long, so add this this near-perfect Mint State-69 Early Releases 2018 Cumberland Island National Seashore Five Ounce Silver America the Beautiful Coin to your collection before it’s too late!