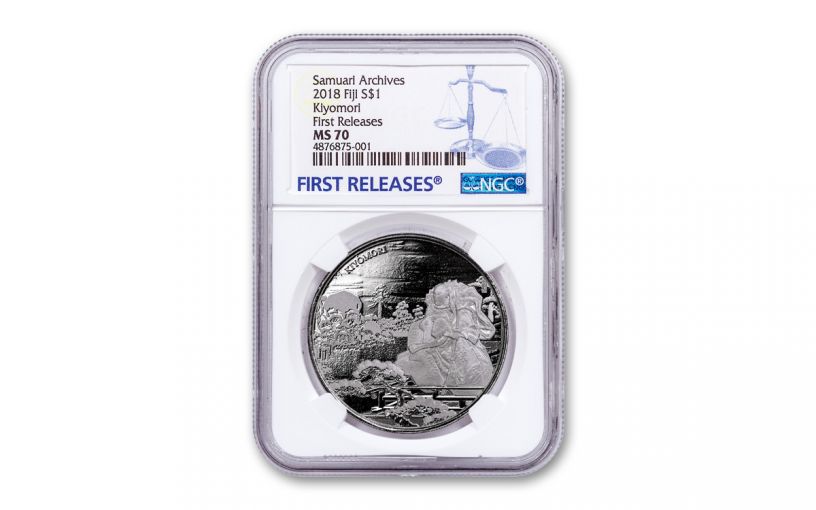 Availability: Out of Stock
This item is currently Out of Stock. Please sign up to be notified if this product becomes available.
Item #
340688
Add to Wish List Add to Wish List Wishlist is for registered customers. Please login or create an account to continue. Add to Compare

When most people think of Samurai warriors, images from Akira Kurosawa’s epic film Seven Samurai, come to mind. The film, which served as the basis for the classic western The Magnificent Seven, introduced the West to the warriors of pre-modern Japan. Now a new coin series provides an even more powerful glimpse into the history of Japan’s famous Samurai warriors with a release dedicated to the most influential Samurai to ever live – and the bloody legacy that haunted him until his dying day!

Struck in one ounce of highly-pure 99.9% silver, this legal-tender coin depicts Taira no Kiyomori (1118-1181), who established Japan’s first Samurai-dominated government. Kiyomori, who despite never taking the title of emperor himself, dominated the country’s politics and was Japan’s de facto ruler for more than two decades. His rise to power was chronicled by famed Japanese artist Utagawa Hiroshige in his masterpiece Taira no Kiyomori’s Spectral Vision completed in 1845. A portion of that woodblock painting is featured on the reverse of this coin. In this design, Kiyomori is depicted as haunted by his past deeds surrounded by eerie, snow-covered skulls in an artistic interpretation of all the bodies Kiyomori had to step over to get to the top.

Superbly struck by the Scottsdale Mint and released by the Republic of Fiji, the 2018 Samurai Kiyomori One-Ounce Silver Coin has been graded by the Numismatic Guaranty Corporation (NGC) as being in flawless Mint State-70 (MS70) condition, a distinction that means your perfectly-graded coin will have ZERO imperfections – showing all features and fields exactly as the engraver and mint intended. In addition, NGC has graded it as being a First Releases (FR) coin, a designation that means it was received by NGC or an NGC-approved depository within the first 30 days of the coin’s release. Collectors seek out these coins because they are produced with new dies and considered to have sharper strikes and deeper mirrors than those that are struck later. Also, the population of coins labeled First Releases is only a fraction of the total mintage.

It’s an incredible silver bullion coin that is remarkable not only for its exceptionally skillful design, but also for its worldwide edition limit of just 15,000 – a remarkably small mintage for a world bullion coin!

Firsts are always important, and with just 15,000 of these extraordinary coins available, you’ll need to act fast. Get the first coin in this exciting new series by adding the 2018 Fiji Samurai Kiyomori One-Ounce Silver Coin to your cart today!