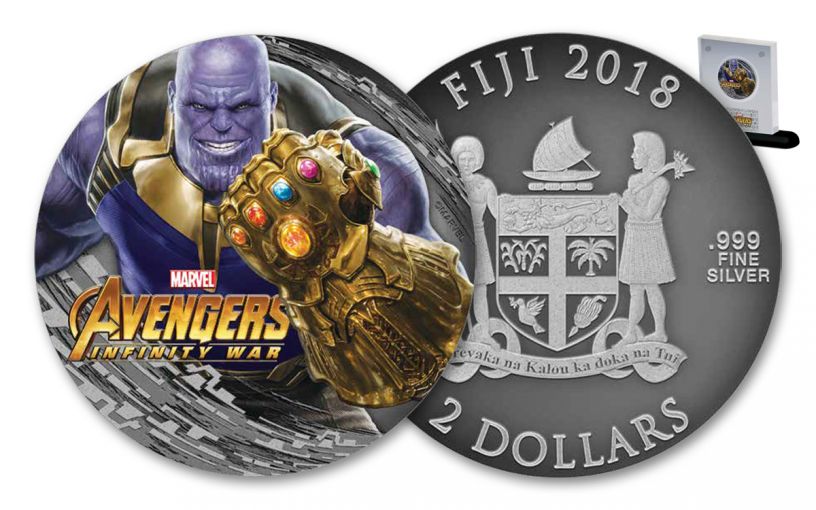 Availability: Out of Stock
This item is currently Out of Stock. Please sign up to be notified if this product becomes available.
Item #
334705

Ever since he made his first appearance for Marvel Comics in 1973, Thanos has been the villain fans love to hate. His near god-like powers have enabled him to seize a vast empire in the universe and only the intervention of the Avengers and their allies have kept him from conquering Earth. What motivates Thanos? Death – Thanos is bent not only on controlling the entire universe but killing everyone and everything in it to appease Mistress Death, his one true love.

If you haven’t already guessed by now, Thanos is insane.

With a character as big as Thanos, it’s no wonder the Marvel Cinematic Universe has been building up to the April 2018 release of its “Avengers: Infinity War” film for years. Ending credits in prior Marvel films have hinted at his presence and in the newest Avengers film Thanos takes central stage as Marvel’s Biggest, Baddest Bad Guy of Them All!

With interest in the Avengers and Marvel superheroes at its peak, the time couldn’t be better to add this incredible commemorative to you collection. It’s a big 40 mm coin struck in two ounces of pure 99.9% silver and features The Mad Titan himself like you’ve never seen him before! Thanks to an antique finish on the coin and selective colorization, Thanos seems to be rising off the coin’s surface in a spectacular 3D effect. He’s depicted at full power, too. On his left hand is the Infinity Gauntlet with the six Infinity Gems that give the owner of each stone control over one facet of the universe. Together, the stones wield unimaginable power. How will the Avengers stop him? Spoiler Alert: You’ll have to check out the film!

If you want to make sure you don’t miss out on all the action, the time to seize one of these coins is now. With just 2,500 struck for worldwide release, they are almost as scarce as the Infinity Gems! Get one of these gems for yourself or get one for someone you know who is a big fan of superheroes. It’ll be a gift they will always remember!

The battle between comic fans and coin collectors for these pieces may rival that of the Avengers versus Thanos. Avoid the fight and secure your coin now!