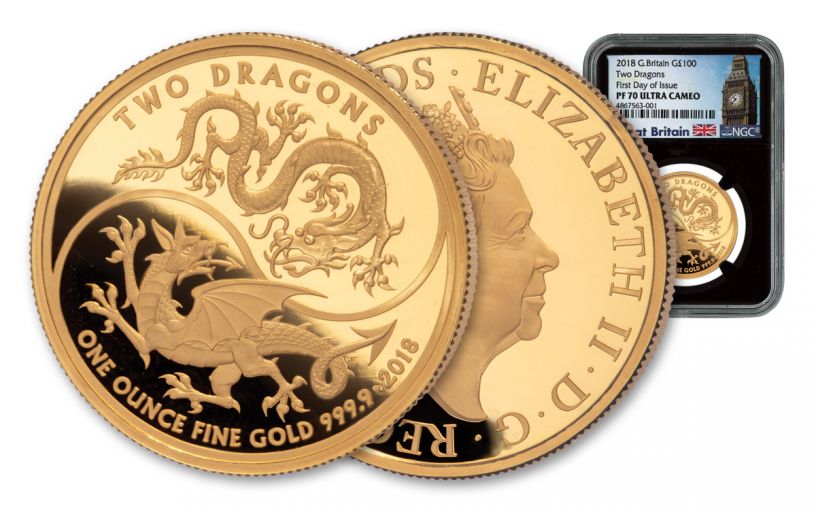 Availability: Call-In Only
This item is only available on a Call-In basis. Please call 1-800-510-6468 to speak to a representative.
Item #
341265
Add to Wish List Add to Wish List Wishlist is for registered customers. Please login or create an account to continue. Add to Compare
Product Description

England has long-had an affinity for dragons. Mythical tales of dragons exist throughout English literature from the stories of Beowulf in the Middle Ages all the way up to J.K. Rowling’s Harry Potter series. Heck, the Patron Saint of England is Saint George and the image of him slaying a dragon has appeared on British coins for more than 200 years! With such a legacy, one would think that Great Britain would have long ago featured the Chinese or Eastern dragon on coins as well. But while nations from around the globe have already done it, the world-renowned British Royal Mint never has – until now!

In honor of its expansion into China, the Royal Mint has just released a spectacular coin that for the FIRST TIME EVER features both the English (Western) Dragon AND the Chinese (Eastern) Dragon! This gorgeous gleaming legal-tender Poof is struck in a full ounce of highly-pure 99.99% gold and features exquisite detail as only the master artisans of the prestigious British Royal Mint can create. A Welsh Dragon is depicted in the classic Western style with an arrow-tipped tongue, four claws on each foot, and wings. Circling above is the Chinese Dragoon. It is shown curved and contorted and covered with scales extending down to the tips of his five-clawed feet. The coin’s weight, gold purity and year date also appear at the bottom of the design.

At 32.69 mm in diameter, this already impressive coin is made even more remarkable thanks to a high grade received from the Numismatic Guaranty Corporation (NGC), one of the world’s leading third-party grading services. Your 2018 Great Britain Mythical Dragons One-Ounce Gold Proof has been graded by NGC as being in perfect Proof-70 (PF70) condition, a distinction that means your perfectly-graded proof will have ZERO imperfections – showing all features and fields exactly as the engraver and mint intended! In addition, your proof will be certified as a First Day of Issue (FDI) coin by NGC – independent authentication that your coin was released by the mint during the premier day of the series' issue. It will come sonically sealed in an acrylic holder with an exclusive Big Ben label.

Coin collectors, gold buyers, dragon aficionados, and anyone who has a love for the Chinese zodiac will all want to get their hands on this coin – and that doesn’t even include the millions of collectors in China who appreciate anything that pays tribute to their rich cultural history. In fact, the bullion version of this coin has already been sold out in China! That’s why with just 500 of these gold masterpieces available for worldwide release it’s plain to see that there are far too few to go around. You will need to act fast if you don’t want to miss out – click one to your cart today!