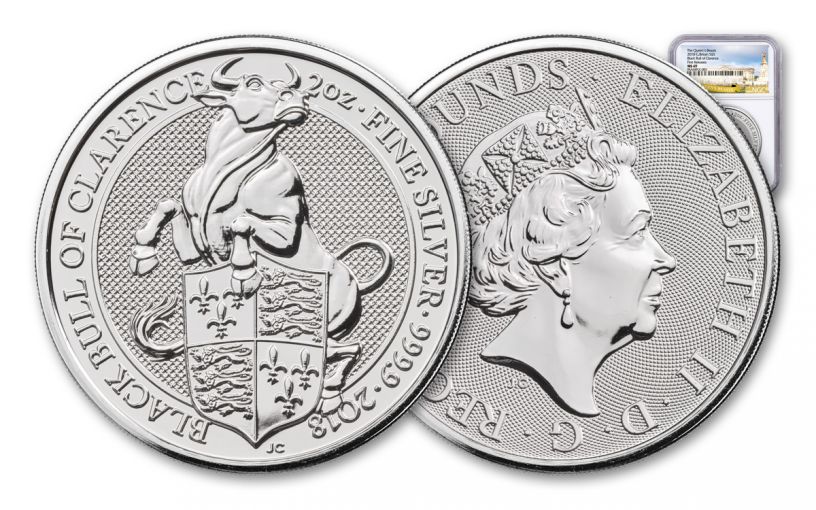 Availability: Out of Stock
This item is currently Out of Stock. Please sign up to be notified if this product becomes available.
Item #
334315
Add to Wish List Add to Wish List Wishlist is for registered customers. Please login or create an account to continue. Add to Compare
Product Description

To honor these royal protectors and celebrate the reign of Queen Elizabeth, The British Royal Mint has released a brand new series featuring The Queen’s Beasts -- ten coins for the ten creatures that stood guard outside her coronation ceremony on June 2, 1953. The 5th coin in this release is the Black Bull of Clarence, a symbol of Edward IV, the first King of England descended from the House of York. Edward reigned from 1461 until 1470 and again from 1471 until 1483. The bull almost seems to charge off the face of the coin and is depicted rearing above the Royal Arms as born by Edward IV and his brother, Richard III.

This regal coin is struck in 2 shimmering ounces of 99.9% silver, and bares a legal-tender value of 5 pounds. It also comes in near-perfect Mint State-69 First Release (MS69 FR) condition as fresh as the day it left the mint. It also comes housed in an acrylic coin holder with a special “Queen’s Beasts” label. This wonderful coin and its exciting designs are breathtaking.

There’s nothing magical about it, order yours now because when the running of these bulls starts they will be gone!