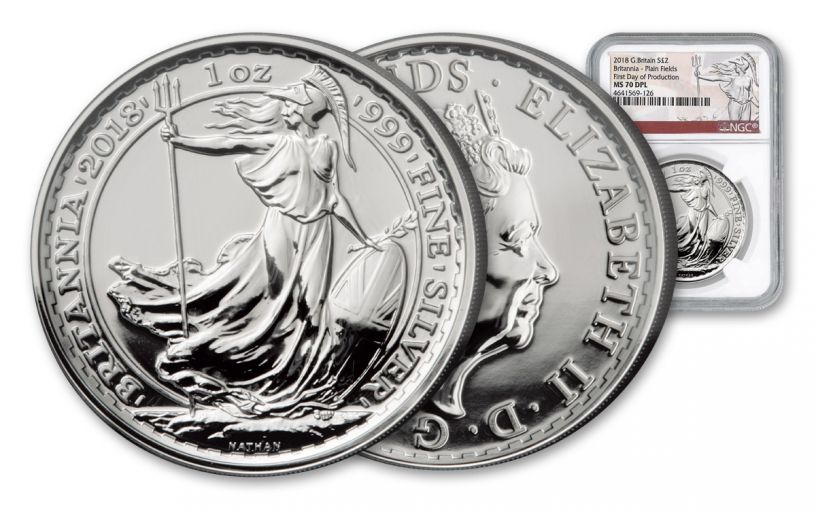 Availability: Call-In Only
This item is only available on a Call-In basis. Please call 1-800-510-6468 to speak to a representative.
Item #
318154
Add to Wish List Add to Wish List Wishlist is for registered customers. Please login or create an account to continue. Add to Compare
Product Description

"Rule Britannia! Britannia rules the waves: Britons will never be slaves," are the best-known lines from a poem that was set to music in 1740. The song captures the essence of British pride, combining the strength of the nation with its pride in upholding the rights of its people. Nearly 300 years later, Great Britain continues to uphold those values with a strong military and a commitment to keeping her people free. The term "Britannia" may apply to the country or, as in the case of the coin, an allegorical figure that stands in her place. That figure stands in a gale force wind on the reverse of the coin with a shield and a trident, symbols of defense and power, respectively. That makes the coin perfect not only for those who have an affinity toward Britain but also those who share the values for which she stands.

Europe has a turbulent history that continues to the present. Wars, plagues, invasions, and, most recently, terrorism have contributed to a climate of uncertainty and fear. While borders have frequently changed, despots come and gone, and cultures clashed, conquered, and disappeared, for much of the past millennia, Britain has been a stalwart of stability, not only in terms of defending her shores but also leading the way in terms of upholding the rights of her people, a concept that carried over to the United States, which with Britain, has promoted the same throughout the world. The Britannia coin in general and Philip Nathan's design in particular capture that stability and offer collectors just a small symbol of it even during challenging times. Don't miss your chance to own this remarkable coin; order now at GovMint.com.