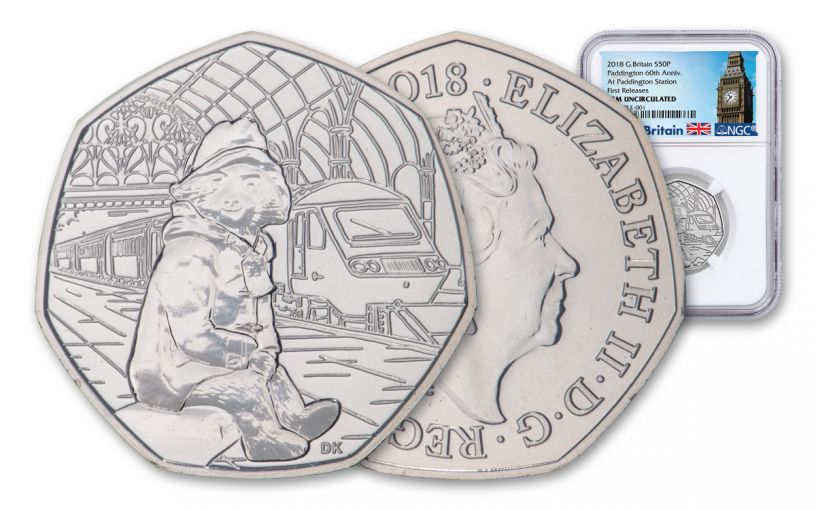 Availability: Out of Stock
This item is currently Out of Stock. Please sign up to be notified if this product becomes available.
Item #
337442
Add to Wish List Add to Wish List Wishlist is for registered customers. Please login or create an account to continue. Add to Compare

What was it about the furry, duffel coat-wearing, marmalade-loving bear named Paddington that had so many people around the world enthralled by his misadventures in England? Was it his Wellington boots? Was it his impeccable English accent and manners? Or was it his sketchy past from “mysterious” Peru? Perhaps it was simply the adorable stories about Paddington that sprung from the agile mind of British author Michael Bond that made Paddington one of the most beloved characters in children’s fiction.

Now, on the 60th anniversary of Paddington’s first appearance in the book “A Bear Called Paddington,” the world-renowned British Royal Mint has struck an incredibly unique 50-pence coin that pays tribute to the whimsical charm of the kind-hearted bear. This legal-tender coin not only features an eye-catching seven-sided heptagonal shape, but the image of Paddington is incredibly detailed right down to his distinctive overcoat and battered suitcase! It’s an adorable design that’s sure to melt the heart of anyone who remembers reading the book as a youngster or who has ever read the Paddington books to a child or grandchild.

Since his debut in 1958, Paddington has become an iconic figure not just in English children's literature, but in British culture as well. A bronze sculpture of Paddington rests patiently in Paddington Station where thousands of commuters and tourists stop for pictures on a daily basis. The frumpy little bear is such a national symbol that when British and French workers completed the Channel Tunnel beneath the English Channel in 1994, British workers chose a Paddington teddy bear as the first item to send to their French counterparts upon linking the two sides of the tunnel. Paddington’s adventures have been translated into 40 languages and have sold more than 35 million copies worldwide, making Paddington one of Great Britain’s most popular exports!

Your 2018 Great Britain Paddington at Paddington Station 50-Pence Coin has been graded by the Numismatic Guaranty Corporation (NGC) as being in gorgeous Gem Uncirculated condition, meaning that your coin is the product of a superb strike that places it firmly among the elite of the run. Your coin will also be certified as a First Releases (FR) coin by NGC, meaning that it was among the first struck by the mint and was verified within the first 30 days of issue. Collectors seek out these coins because they are produced with new dies and considered to have sharper strikes and deeper mirrors than those that are struck later. Also, the population of coins labeled First Releases is only a fraction of the total mintage.

With the popularity of Paddington in books, television, film and toys, these coins are sure to be highly coveted by collectors everywhere. Order one for yourself and get more for your children or grandchildren, who, like you, have been captivated by the delightful tales of Paddington Bear!

When Paddington Bear was found at London’s Paddington Station, a note was pinned to his coat that read, “Please look after this bear.” Now you can look after Paddington with this exceptionally imaginative coin!