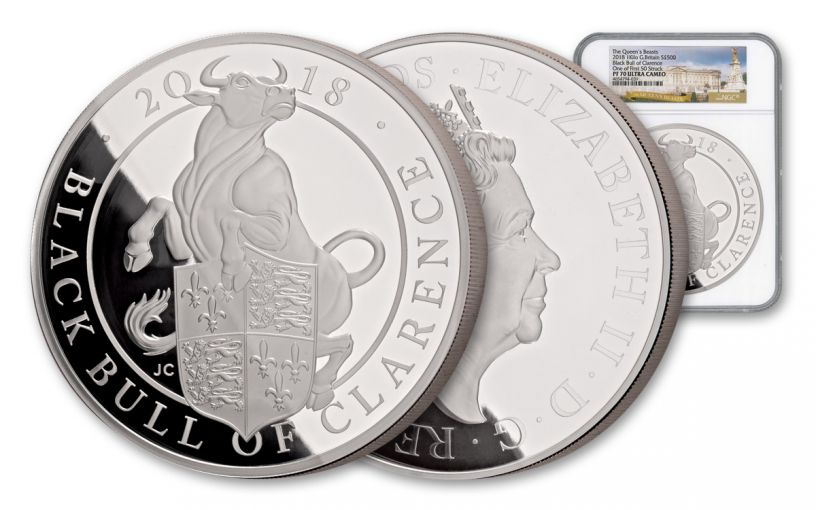 Availability: Call-In Only
This item is only available on a Call-In basis. Please call 1-800-510-6468 to speak to a representative.
Item #
332941
Add to Wish List Add to Wish List Wishlist is for registered customers. Please login or create an account to continue. Add to Compare

Behold the Black Bull of Clarence
Great Britain’s Royal Mint is celebrating the reign of Her Majesty Queen Elizabeth II with a brand-new series featuring The Queen’s Beasts—ten creatures that stood guard outside her coronation ceremony on June 2, 1953. Each beast, both real and mythological, represented a part of her lineage. Constructed of wood and plaster, the beasts stood six feet tall and weighed more than 650 pounds each! Luckily, The Royal Mint has created a series of legal-tender coins that allow you to bring The Queen’s Beasts home without the use of a fork lift.

This latest release of the Queen’s Beasts series features the Black Bull of Clarence. Fierce and unyielding, this beast was a symbol of Edward IV, the first King of England descended from the House of York. Edward reigned from 1461 until 1470 and again from 1471 until 1483. Along with the bull comes the Royal Arms as born by Edward IV and his brother, Richard III.

It’s an impressive piece of numismatic art created by Royal Mint engraver Jody Clark, the artist also responsible for the fifth and most recent effigy of the Queen.

A Brawny Bull, a Living Legend, a Phenomenal Proof!
Legal tender 500 pounds sterling, each 2018 Queen's Beasts Black Bull of Clarence Proof is struck in full Kilo of 99.9% fine silver using polished dies and multiple strikes -- all resulting in a coin with sharp details and mirror-like fields. With the Queen's recent accomplishment of becoming the longest reigning monarch in British history, it's no surprise that silver proofs from this landmark series are seeing high collector demand. Don't miss out on your chance to continue the series, start a new collection or just get a great piece of numismatic art -- buy yours today!

Each Queen’s Beasts Bull Proof comes graded as perfect Proof-70 Ultra Cameo (PF70 UC) condition by NGC and certified as One of First Struck. Don’t wait for these bulls to run away!