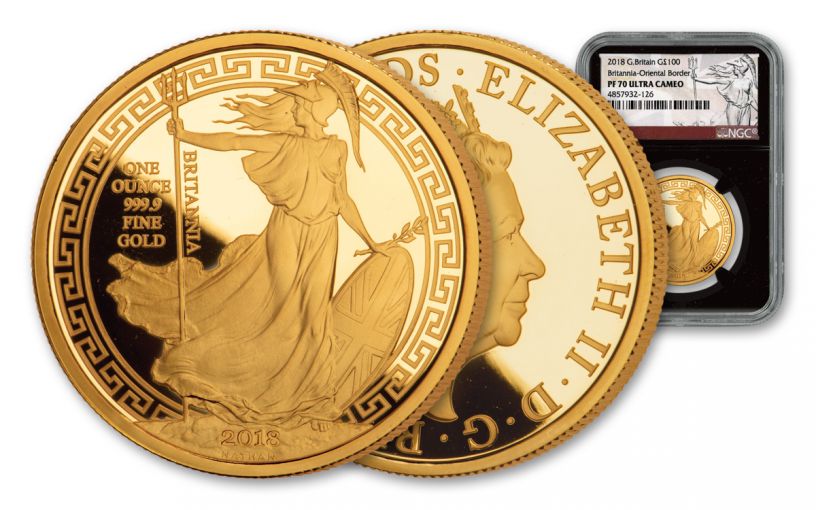 Availability: Call-In Only
This item is only available on a Call-In basis. Please call 1-800-510-6468 to speak to a representative.
Item #
338885
Add to Wish List Add to Wish List Wishlist is for registered customers. Please login or create an account to continue. Add to Compare

While the warrior queen “Britannia” has graced British coins of the realm for centuries, investors in the Empire’s Far East colonies of Hong Kong and Singapore first saw her on the British Trade Dollar in 1895. From that moment on, the regal and assertive Britannia became a familiar sight for merchants in China and throughout Asia. From the 90% fine silver dollars of the 19th century to the highly pure bullion of the 21st century, the heritage of trade between these two corners of the world continues – with Britannia's flowing robe, outstretched trident and Union Jack shield still featured on British gold coins exchanged today.

Now, to commemorate both the symbolic history of Britannia in Asian commerce as well as the vital role her namesake coin serves there today, the British Royal Mint has introduced a brand new one-ounce Gold Britannia Proof Coin for 2018, featuring a gorgeous border inspired by the artistic patterns of East Asia! Each one-ounce coin features the award-winning 1987 Britannia design surrounded by an ornate Oriental border that was inspired by the Chinese-themed rooms at Buckingham palace and the Royal pavilions in Brighton. The portrait of her Royal Highness Queen Elizabeth II on the coin’s obverse has also been enhanced with a new guilloche background. In addition, your 2018 Great Britain Britannia Oriental Border One-Ounce Gold Proof has been graded by the Numismatic Guaranty Corporation (NGC) as being in perfect Proof-70 Ultra Cameo (PF70UC) condition, a distinction that means your perfectly-graded proof will have ZERO imperfections – showing all features and fields exactly as the engraver and mint intended!

East meets West again on this legal-tender coin as the 2018 Great Britain Britannia Oriental Border One-Ounce Gold Proof continues the tradition of being a popular collector coin with an ever-growing worldwide appeal. Don’t miss out; add one of these coveted proofs to your cart today!

Britannia coins have been a massive hit with collectors both in the United Kingdom and around the world. In addition to their already legendary status with stateside collectors and gold buyers, they have been steadily increasing in popularity among collectors in Asia thus making the battleground for these coins extremely fierce! Whether you're already a fan or know someone who is, this brand new take on an iconic coin is one that no Britannia collection should be without. Don't give yourself the slightest chance for disappointment – bring home this phenomenal Great Britain Britannia Oriental Border One-Ounce Gold Proof today!